Nervi’s breakthrough commission–at age 34–was for Florence’s main stadium, and both the expressive sensibility that would appear in the rest of his work and the architectural compromises his engineering was forced to undergo are present even at this early stage,

The stadium is, in many ways, not unlike other concrete stadia of the era. It is supported by a regular march of concrete frames, upon which a deck of horizontal treads and vertical risers form the base for the seating above. The frames are reasonably well detailed for 1932, but it is the stadium’s roof and it’s three helical staircases that marked Nervi as an emerging talent. The roof is supported by curved cantilevered beams that thicken toward the root–and then divide into two branches, one spanning the rear of the stand, the other diving into the frame below. Their respective tapers follow static principles, thickening where bending forces are greatest, and tapering elegantly to show that this force dissipates toward the ends. It’s a masterpiece of subtly didactic structural form. 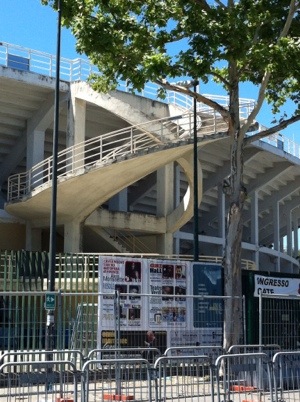 The helical staircases are far less hewn to explicit structural form, but they’re incredible pieces of structural sculpture. Nervi faced the problem of exiting spectators from the rear of the stand, and then returning them to the concourse directly underneath. A simple scissor stair would undoubtedly have sufficed, but Nervi was clearly inspired by the desirable flow of the crowd, and the the stairs are, as a result, semi-circular in section. To support these, the story goes (yet to be confirmed, but utterly convincing in its simplicity) that Nervi had no choice but to design mirror-image helical beams that supported the stairs at their midpoint, because there was simply no way to mathematically model the load that the stair would impart. Whether true or not, this is a striking instance of his claim that the best engineering was intuitive, rather than strictly mathematical. And the stairs are, of course, still standing.

As for the architectural compromises, there’s that tower, which has more to do with Fascist aesthetics than with any real function. And the exterior of the main stand, the one with the roof, is a sobering example of Mussolini classicism, stripped of any humanizing detail: 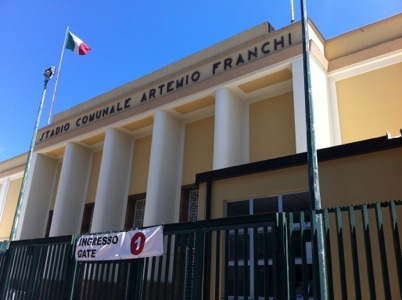 The stadium is in good shape, generally, and it is still home to Florence’s football team. And it hosts big concerts, like Madonna, who’s playing there tonight. Her security thought it was pretty funny that I thought I might get closer to take some detailed shots, so these will have to do for now.

There are some areas of concern, in particular the famous roof, which has been covered by metal cladding–not sure whether this is suggestive of water infiltrating the concrete, though that would be a good guess given its era, the lack of great waterproofing materials then, and the relative flatness of the thing.