We finished a strong semester yesterday in truly noble surroundings, celebrating the end of the Des Moines Courthouse Studio project by holding our review in the lobby of the Mies van der Rohe Home Savings and Loan (now the Catholic Diocese) building downtown.  Recently restored, the Mies space looks fantastic, and six interdisciplinary teams did it justice with schemes for a truly difficult mash-up program of federal courthouse and mixed commercial and residential uses on the riverfront site of the former YMCA building.

I posted about the studio at the start of the semester, but basically we were exploring the possibility of putting a new Federal Courthouse on a site that the City of Des Moines would prefer to have developed commercially.  Could you, we wondered, do both?  Could you put a truly monumental Federal building on a site and still have room for apartments, restaurants, coffee shops and bars that would keep the life of the city going?  Or, as one student put it in the run up to our mid-review, can a building be urban and civic at the same time? 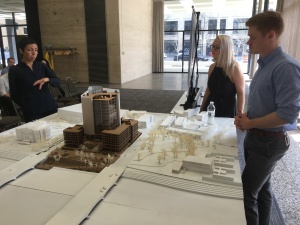 I’d say that our answer, after fifteen weeks of exploration and development, would be a qualified “maybe.”  Not surprisingly, the security considerations that go into a courthouse really mitigate against the open, pedestrian nature of a downtown mixed-use structure.  Still, student teams of interior designers, architects, and landscape architects came up with some clever strategies of separating court functions from the surrounding streets with buffers of mixed-use development, and they tackled the notoriously difficult circulation requirements that come with prisoner, judicial, and jury circulation with equally sophisticated elevatoring and logistic strategies.  What do you do with criminal defendants when the fire alarms go off?  These sorts of questions have real consequences for building design, and they make it obvious why so much courthouse design in the post-Oklahoma City bombing era have tended toward fortresses more than engagement.

The Courthouse controversy in Des Moines is ongoing–the Federal Courts and the City are still discussing where it will go, and it’s one of the biggest questions the resurgent downtown will face in the coming years.  We held the review in the middle of downtown on purpose, and were really happy to have a steady stream of architects and designers stop in throughout the afternoon.  That speaks well to the commitment that Des Moines’ design community feels toward the city’s development, and we’re hoping that this studio, in a small way, helps keep the conversation going. 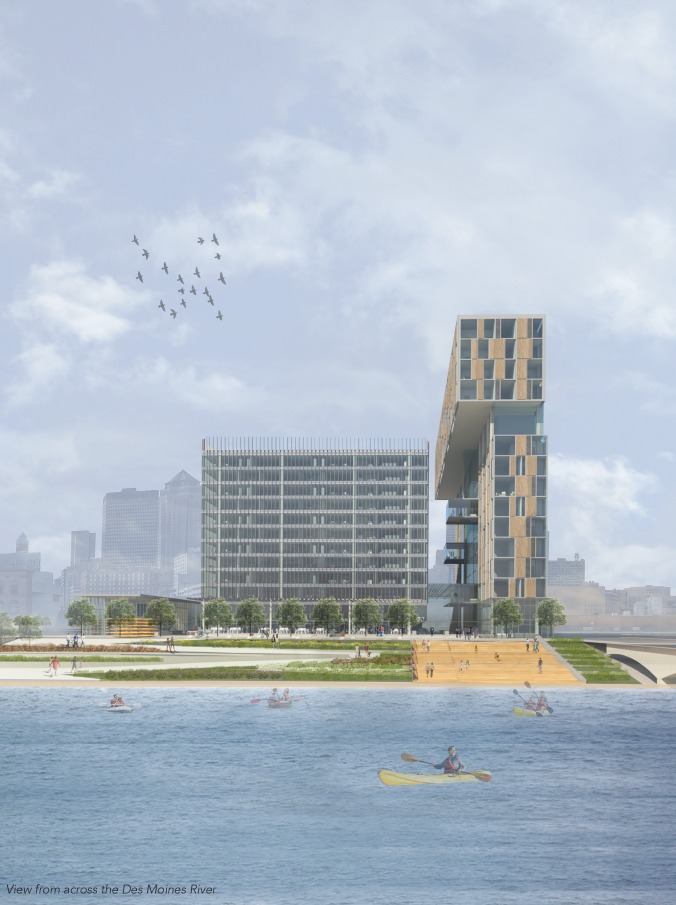 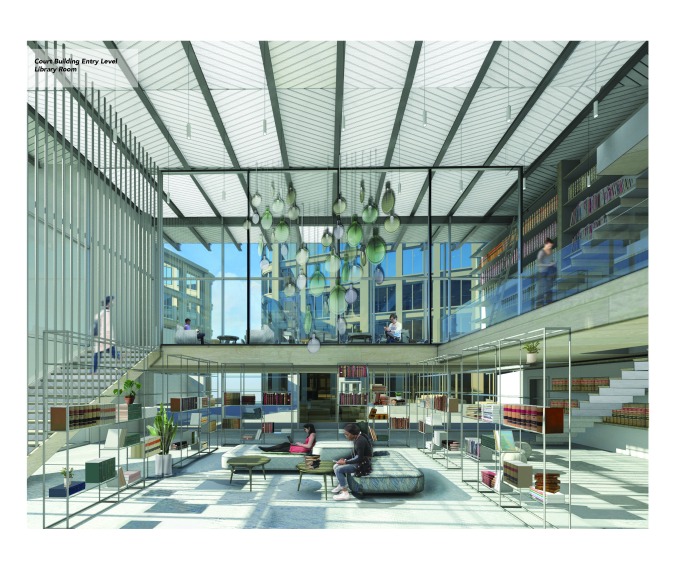 Putting the finishing touches on a paper that will help celebrate the launch of Aesthetics and Technology in Building: The Twenty-First Century Edition later this summer.  Part of our job is to show how Nervi’s work was embedded in the culture of the 1950s and 1960s, in particular that his buildings were part of the global fascination with the design products of the “Italian Miracle,” the surging economy that was based in part on the country’s reputation for artisanal production, translated into industrial scale.  Think Pininfarina car design or Olivetti’s typewriters.

Nervi’s work was published widely–Time and the New Yorker both ran laudatory profile pieces around the 1960 Olympics, when his arenas served as the backdrop for the worldwide broadcast of the Games.  But that was only one medium.  Nervi’s buildings also served as backdrops for scenes in some of Italy’s best-known films of the decades, too.  The Palazzo dello Sport, for instance, was practically a character in Antonioni’s L’Avventura (1962), where it served as an elegant backdrop for Monica Vitti’s foray into suburban alienation (and the hunt for a lost black poodle).

Antonioni also used Nervi and Gio Ponti’s Pirelli Tower in Milan in a similar way–as a backdrop establishing the scene for another emotionally taut drama in La Notte.  Pirelli is in the very first shot (above), and the opening credits roll while the camera descends in its window-washing machine, reflecting the rest of Milan in its glassy curtain wall.  The contrast with the 19th century fabric around it is obvious and intentional–Antonioni’s films always dealt with the cultural and social changes brought by the ‘Miracle,’ and Nervi’s sleek buildings are easy to interpret as architectural metaphors.

You’d think that the greatest of these films–Fellini’s La Dolce Vita (1960) would have been all over Nervi.  Despite multiple viewings and a constant effort, though, I’ve never noticed even a bit role for him.  The opening scene, with a prefabricated sculpture of Jesus being carried by helicopter over the ancient monuments and new housing blocks of Rome, would have been perfect–the Palazzo from above would have been a great target.  But no such luck.

Riccardo Fellini in his brother’s I Vitelloni (1953)

Fellini did use Nervi as a backdrop in an earlier film, though.  The Kursaal Ostia pavilion is the backdrop for the opening scene of I Vitelloni, a 1953 film about a group of ragazzi bored with their lives in suburban Ostia, but seemingly incapable of moving on.  The long eyebrow of the pavilion is mostly just eye candy in this one, I think, but pretty good eye candy at that.  And it would have been brand new–a rare bit of urbane design in a seaside resort town known more for its beach culture than its architectural sophistication. 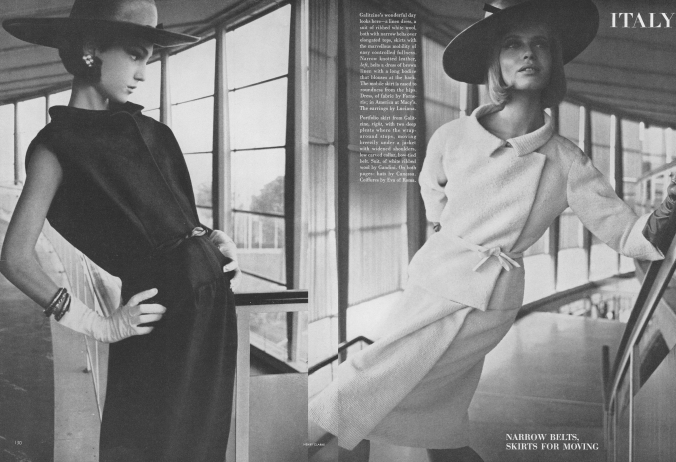 And, lest anyone think that Nervi’s celebrity was confined to film, here’s another find–a fashion spread from Vogue in April, 1964, set among the piers and curtain wall of the Palazzo dello Sport.  Nervi’s tastes ran more to conservative suits than to anything that would show up in Vogue, but there’s definitely something to the elegant proportions of his forms that made this spread work…

After five years of collaboration, pleased to report that my co-editors and I have just sent off the final proofs for a critical edition of Nervi’s classic, Aesthetics and Technology in Building.  We’re hoping it hits the streets this summer, and yes, there will be an event (details to follow).

Nervi was invited to deliver one-third of the Charles Eliot Norton Lectures in Poetry at Harvard in 1961-62, along with fellow designer/engineers Felix Candela and Buckminster Fuller.  The Norton Lectures had a long tradition of inviting both traditional poets, and artists whose work evoked poetry, but that year’s invitees were particularly striking.  Could engineers be considered poets?  In an era of profound optimism about technology’s prospects, this was an inspired choice.

Nervi did not disappoint.  He delivered four lectures: one on a general philosophy and history of structural architecture (borrowed, I think, directly from Viollet-le-Duc’s writing), one on the formal possibilities of concrete poured in place, one on the more intricate potential for prefabricated concrete (especially ferrocemento), and one on the future of architecture and his suggestions for architectural education.  Taken together, the lectures were a prescription for structure and construction as an architectural grammar, and Nervi was something of a Strunk and White, laying down ironclad principles but also noting that great architecture required an aesthetic sensibility that, famously, “welcomed” the possibilities offered by those principles.  While critics generally found Nervi’s recommendations conservative (he was, at the time of publication, in his mid-70s and there were far more radical ideas bubbling up in the architectural world in 1965), his essays–especially the first one–have stood up well and have plenty to offer designers, students and engineers today.

In addition to Nervi’s texts, we’ve commissioned several essays by leading scholars–Gabriele Neri, Alberto Bologna, and Jo Abram–that frame Nervi’s words and the event of the lectures themselves within his career and in the architectural culture of the day.  A center spread of new images by German photographer Hans-Christian Schink shows Nervi’s roof patterns in a new light, and an essay by Roberto Einaudi, who served as Nervi’s translator for the lectures, offers previously unpublished details about how these came about and how they became Aesthetics and Technology in Building.  It has been a particular honor to work with Einaudi, who has also combed through the original texts–in addition to Nervi, he worked in Kahn’s office, so our discussions have been wide-ranging, to say the least.

Happy to have sent this off in the midst of a quick trip to Rome–seems only too appropriate.  The first discussions about bringing this edition out took place during a long lunch at the American Academy in 2014, so hitting the ‘send’ button in close proximity has been apt.

Looking forward to seeing Nervi’s words and images out in the world, as always.

There’s likely to be a lot of press about this in the next few days–a resident dies in a luxury high-rise apartment building that was constructed before sprinklers were mandatory, but whose owner lobbied the local authorities to keep a grandfather clause in the code.

Chicago failed to get rid  of its grandfathering exemption for residential high rises after the Cook County Administration Fire in 2003, and Grenfell Tower, infamously, was unsprinklered, so New York isn’t alone.  Chicago has put an alert requirement into their code, but news reports note that in the recent New York incident the only residents told to evacuate were told via texts from the building owner’s attorney (!).

But no matter where this is happening, it’s unconscionable.  Published news reports note that the cost of retrofitting this tower with fire sprinklers would have come to about $4.00 per square foot.  Given this building’s rental costs of somewhere around $2000.00 per square foot, this seems like a ludicrously small investment–the building owner’s other notable Manhattan property was, in fact, retrofitted to ease tenant concerns in 1999.

Fire sprinklers are one of the great success stories of 20th century building technology–no multiple deaths have ever occurred in a skyscraper due to fire where the sprinkler system was working properly.  The fact that this landmark building isn’t sprinklered says a lot about its famous owner’s priorities, which should frankly trouble all of us.

An honor today to help lead the Friday morning Fellows’ Walk at the American Academy, along with Director John Ochsendorf and Roma Tre faculty member Annalissa Metta.  We looked at the Via Flaminio Olympic sites, and it was particularly revealing to see Nervi’s Palzetto and Stadio Flaminio in the context of the Olympic Village to the north–Prof. Metta’s research on its history and design shows how planners thought about the whole development in terms of Roman traditions and a (largely unrealized) vision for the future.  I was happy to add bits of the Nervi story to the walk–quite a thing to be able to see the Olympic structures together, thanks to the tireless work of AAR staff and the Comune di Roma personnel who spent the morning unlocking several dozen gates.  (Some of which I’ve–just maybe–jumped in previous lives).  Nothing more to add, other than some glorious eye candy, thanks to a perfect spring morning here. 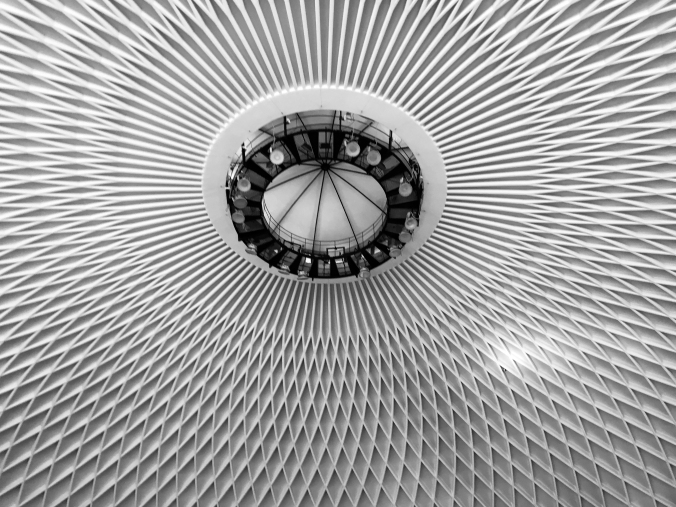