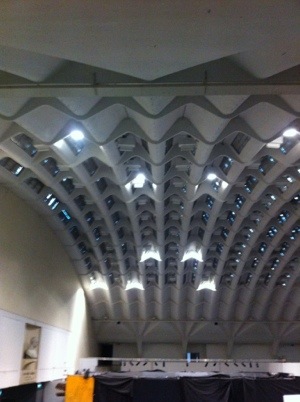 Nervi’s earliest work in Turin came with the construction of an exposition hall in the city’s riverfront park in the aftermath of WWII. Because of its industrial importance, Turin had been bombed heavily, and part of the city’s reconstruction involved a precinct that had been devoted throughout the 19th century to public parks and expos. Fiat needed room to show off its new cars each year, and commissioned its in-house architect to design a large hall as part of a complex that included a theater and restaurant.

Nervi and Bartoldi received the commission to build the main hall, and the result of their discussions with the city and Fiat was a comprehensive re-design that used lightweight precast elements of ferrocemento to span the main hall, and two lines of poured in place fans and piers to support these. Like many of their projects, their system–an extension of their work on the Orvieto airplane hangars during the war–proved both economical and quick to build. It’s repetition, it’s ability to include skylights (closed during my visit, natch), and it’s sculptural form all combined to add a powerful visual grain to the vast space below, too. 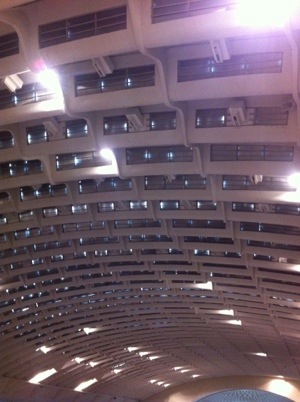 At the end of the hall, the architectural plans called for a rather awkward apse, semi-circular in plan, and here Nervi proposed a change in detail as well. Building on an idea first explored in a bus garage they constructed in 1945, the revised ceiling plan for this apse took the diagonal grid of a lamella arch system, which they had used at Orvieto, and literally twisted it around the circular form. The resulting diagonals traced intricate spirals across the dome that mimicked precisely the logarithmic shapes of pine cones, sunflowers, and the Nautilus shell. By using similarly scaled pans, Nervi and Bartoldi were able to construct this complex shape with relatively simple means, and this experiment provided the basis for future work at Chianciano and the 1960 Olympic sites. 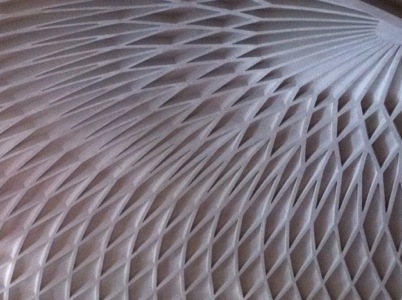 If you look closely, you can see that they didn’t quite get the geometry right–the third row up from the bottom has much longer pans than the rest of the roof. Eventually they’d get it right, though…

The Salone B and it’s later cousin, Salone C, are both still in use and well-maintained by the city. There was a rather fantastic show up over the weekend, in fact: 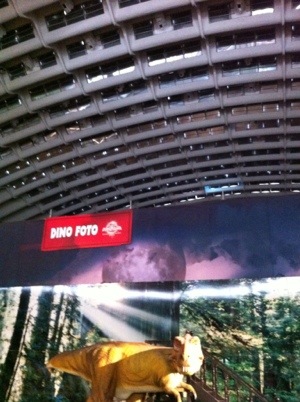 One of my quiet goals for this trip was to get inside the Palazzo Lavoro in Turin. Nervi designed this for Italy’s centennial exposition in 1961 and by everything I had read it was a lost classic of postwar architecture. At the time it was huge news, in all the publications, and even included as a canonical building–alongside 860-880 Lake Shore Drive and Ronchamp–in some texts. It was the flagship pavilion at the exposition, and as such it’s gigantic, 160 meters square, and nearly 30 meters tall. And it’s detailing and structural expression are among Nervi’s best.

So why is it now a fairly obscure relic? After the fair, there was never any definitive plan about what could be done with it. Turin suffers from an abundance of exposition facilities (and, after the 2006 winter Olympics, sports facilities) and not enough action to fill them. So, as my guide told me, the Palazzo was “constructed 50 years ago and abandoned 49 years ago”. As it fell from use, it also disappeared from the press, and despite numerous proposals–community college, sports arena, shopping mall–there really isn’t that much you can do with such a giant volume.

Through some connections I made in the archives last week, I hooked up with a design firm called comunicarch that arranged for me to visit and to get inside. Their partner showed me around, and she explained that the competition was held only two years before opening day–not atypical for Italy, but a schedule that eliminated any but the most efficient approach. Nervi won with a scheme that violated the competition’s clear call for a “column-free space,” a rules violation that led to a lawsuit but that ultimately provided a solution that was faster and cheaper than any other. The key to the design was a standardized column, tapering from a cross shape at its base to a circle at the top using Nervi’s system of twisting board form construction. At the top of these, Nervi proposed concrete umbrellas, but ultimately these were rendered in steel to ease and speed construction. Each parasol is 38 meters square, leaving 2 meter gaps between them that are simply covered with skylights. The structure, backlit by a bright sky, seems impossibly light and hovering, and the volume beneath it is enormous and atmospheric: 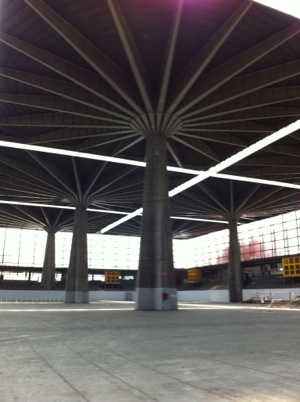 I am not easily impressed by large spaces, but this was breathtaking when we walked in. The only thing I’ve seen that was similarly vast and so well scaled was the Moffett Field airship hangar in Palo Alto–a space so vast that it actually induces vertigo. We were lucky to have a sympathetic security guard who walked us all over the building, up on the galleries to get close to the roof: 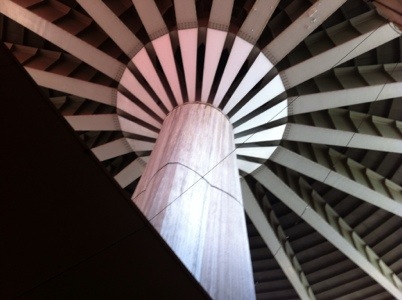 And around the exterior to see the curtain wall, which is all steel: 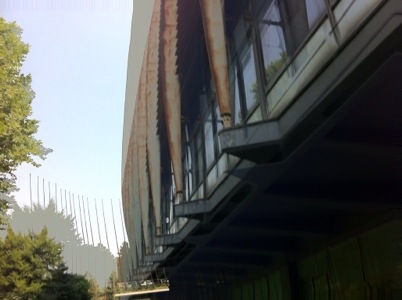 The sunshades are precise, sharp blades that help to break down the bulk of the building from outside–and they don’t appear on the north facade, which Is absolutely right in terms of solar geometry. The supports are gracefully shaped in steel. They each change in plan from a circle at the base and top to a thin blade in the middle, expressing their wind load-bearing function. The entire thing is vast but richly grained–it must have been both a thrilling experience to walk into, and yet comfortable to spend time within. Gio Ponti did the exhibit design, which wove between the giant piers in a much more casual, organic manner–the contrast must have been intense.

It was incredible to see it first hand–one of the most stunning site visits I’ve ever made. But it was also quite bittersweet, because the structure is virtually derelict. The cladding has whole panels missing, there are piles of moldy furniture throughout its galleries, and it has become overgrown and populated by birds and feral cats–our security guard kept a broken pool cue with him while we walked around, just in case. A recent proposal to transform the space into a retail center has apparently just fallen through, and while it would have carved that grand space up into dozens of cluttered shops and arcades, it would have funded the restoration of the structure. As of now, the Palazzo’s future is unclear, but after fifty years of neglect and with no clear re-use ahead, it is descending rapidly into an unrecoverable ruin. While it may have fallen out of the history books, losing such a vast and humane space would be a tragic loss of a great postwar building. 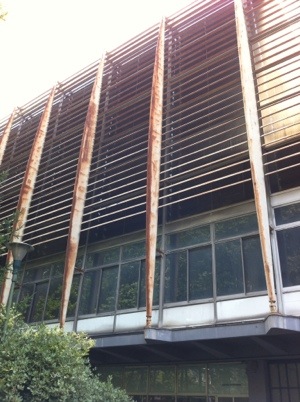