Happy (almost) new year! As things kick over, celebrate the centenary of these Chicago skyscrapers:

The third Studebaker building is almost completely unknown, but there are good reasons to add it to the list of truly innovative Chicago construction. It included a shallow concrete beam system that approached a flat slab in its structural performance. The beams seem to have been added to comply with a young Chicago code section on concrete, but if they had been eliminated, as the engineer thought possible, it would have given Chicago one of the first truly flat concrete slabs in the country.

Less heralded than its sister building, the Reliance, the Fisher was one of the last completed designs by Charles Atwood.  Atwood had joined the office of Daniel Burnham after the untimely death of John Wellborn Root in 1891.  He was something of a mysterious presence, hired from New York on the recommendation of several architects there.  He was a gifted draftsman and stylist, and many considered the Fine Arts building at the Columbian Exposition (now the Museum of Science and Industry) to be the best building at the Fair.

By 1895, plate glass prices in Chicago had plummeted, the result of overeager production in the gas fields of Indiana.  “Plate glass,” the Tribune reported, was “cheaper than bricks,” and Dankmar Adler, among others, publicly noted the “rage for glass surfaces” that marked skyscraper design at mid-decade.  The Reliance was among the more extreme examples of this trend, with windows six by eight feet.  But Atwood’s design for the Fisher was not far behind.  Though it used more conservative double-hung windows instead of the Reliance’s large, fixed panes, the surface of the Fisher is well over 80% glass, a spread that would have been decidedly uneconomical just a few years before when glass production could hardly keep up with the city’s demand.  The Fisher was thus able to offer bright, daylit offices, an important consideration in times when electricity was still expensive and light bulbs were inefficient, short-lived, and costly.

The Fisher also employed the latest structural technology, using riveted steel connections to provide resistance to wind.  While this technique had been used on the Reliance as well, the unique site of the newer building–in a narrow block between Dearborn and Plymouth Street, and adjacent to a very short neighbor–meant that it required none of the masonry fire walls that bordered the Reliance on two sides.  It stood very much alone, with four open sides above the fourth floor.  Inland Architect breathlessly announced that it was the “first building…without walls,” and that it had used less brick than any skyscraper yet built in the city.

A building “without walls” neatly describes what later generations would see in the Fisher and Reliance–prototypes of the mid-twentieth century ‘glass boxes.’  Atwood, of course, intended no such thing, but the Fisher is a good early example of the potential for thin, largely glass skins coupled with lightweight, skeletal frames.  This formula would quickly die out as glass production in Indiana collapsed around the turn of the century, and as electricity prices dropped shortly thereafter.

Atwood died in December, 1895, before the Fisher was completed.  While attributed to overwork, Burnham’s letters show that Atwood was actually fired just days before his passing, and Burnham would later say privately that Atwood had been addicted to opium.  The Fisher, with Atwood’s ingenious sea-related neogothic ornament, remains well-restored and has been converted into apartments.  It will be home for the next five months while I spend a sabbatical term working on the book. 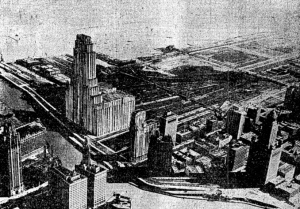 Santiago Calatrava’s “Chicago Spire” is in the news this week as local unions have suggested their willingness to help back the stalled project.  The design, for a site next to Lake Shore Drive and just north of the River, would be some version of the world’s tallest residential tower.

Recently I came across this image, from June, 1928, of an unbuilt “tallest” that was planned for a nearby site.  Variously called the Crane Tower or the Apparel Mart, this design by Walter Ahlschlager was the subject of one of the first air rights deals for a commercial structure.  It would have risen above the Illinois Central’s passenger rail lines, providing a new terminal, parking for 1200 cars, a 1000-room hotel, and exhibition and office space for the City’s fashion industry.  Three professional club quarters and a rooftop swimming pool were also mentioned as amenities for tenants and guests.  The tower was to have been 75 stories, which would have been fifteen stories higher than the Woolworth in New York, which held the record at the time.

The project’s timing, of course, could not have been worse.  While it was announced in 1928, changes in both the program and the site extended the design process through 1929.  Various schemes show the tower on what is now East Wacker Drive (where the Hyatt Regency is now), or on Randolph, on the site of the Standard Oil building (later Amoco, and now Aon).  While the clients dithered, the financial crisis of 1929 hit, drying up funding and tenants.  The project died quietly.

Ahlschlager seems never to have recovered the standing that made him a logical choice for such a large project.  While he had executed a number of small towers in the Loop and the more complex Medinah Club (now the Intercontinental Hotel) on North Michigan Avenue, he did not design another large building in Chicago after this project.  The site took decades to develop, though the air rights lease that the Apparel Mart syndicate had arranged ended up playing a role in the development of this entire area, including Illinois Center.