The 1960 Olympics’ main arena was sited atop the hill at the southern end of the EUR district, a commanding location that necessitated a signature statement of the Games’ style. Nervi worked with aging architect Marcello Piacentini, who had been the lead planner of EUR and a leading adherent of the stripped classicism that came to represent Fascism throughout the 1930. This was, to say the least, an odd choice, and drawings in the archives show that Nervi’s approach was entirely at odds with Piacentini’s desire for a neoclassically inspired dome as a backdrop to his by then aging and already discredited suburban statement of political and corporate power.

Nervi clearly won out, and the result was one of his more complex weavings of structure and circulation. The roof was a restatement of his folded ferrocemento ribs at the Torino Esposizione, here wrapped into a circular plan and propped up by attenuated in situ concrete fans. These, in turn, were supported at the edge of the seating bowl by inclined piers that echoed those at the Savona rail station, with a section that twisted to minimize interference with circulating spectators below. The concourse itself was covered by a ring of propped, double cantilevered concrete bents, and enclosed by a steel-braced curtain wall system that echoed the contemporary exterior of the Palazzo Lavoro, and the underside of the seating bowl was formed from lamella ferrocemento pans that were similar to those being used for the Palazetto several miles north.

In some ways, the Palazzo was the crowning moment of Nervi’s busiest, most productive period. Between 1956 and 1962 his office completed both Olympic sports arenas and the Stadio Flaminio, the Palazzo Lavoro in Turin, Marcel Breuer’s UNESCO building in Paris, the Savona station,the Pirelli tower in Milan with Gio Ponti, and the George Washington Bridge bus station in New York. Nervi turned 70 in 1961, and while there were several office towers, ecclesiastical projects, and bridges to come, this represented the peak of the office’s production.

As such, the Palazzo can be seen as a summation of the various techniques that Nervi had perfected in the previous decades–the corrugated, prefabricated concrete roof, the transforming column, the statically expressive bents and the transforming column sections here all took previous experiments and collaged more refined, polished versions into a single whole. It’s kind of like a greatest hits album.

And that’s a double-edged sword. Like most greatest hits collections, the Palazzo is a convenient place to see many of Nervi’s main themes in action, but whether they hold together in a consistent narrative or not is another story. The building section is complex enough that it isn’t really easy to grasp unless you spent some time moving through it (for the record, the security guard who let me in wasn’t terribly interested in such meditations…). And unlike the smaller Palazetto, it’s hard to understand the building as a whole. The Palazetto is a single idea relentlessly expressed: a lamellar dome, lifted above seats and circulation by a ring of structural forks, and inflected to bring in daylight. The Palazzo can’t quite be summed up like that. It’s a necessarily more complex building, but there isn’t the single diagrammatic stroke that makes it cohere. It’s also true that daylight plays a far smaller role here (in fairness, the upper level windows have been blocked off for daytime events, so you can’t really tell what it would have been like flooded with sun).

Still, the building is impressive, and for such a large arena (16,000 seats) it is remarkably well-scaled. And it’s proven continually useful, both for sporting events and concerts.

The Rome excursion is wrapping up nicely. This was the last site visit I had scheduled, though there’s a bridge in Verona, and of course UNESCO in Paris, but the next two weeks are going to be a combination of backpacking and the triennial Construction History Congress. Posts will be a bit sparer while my partner and I hit some spots on the architects’ backpack tour that we’ve both somehow missed in our travels. Hope to see many of you in Paris next week… 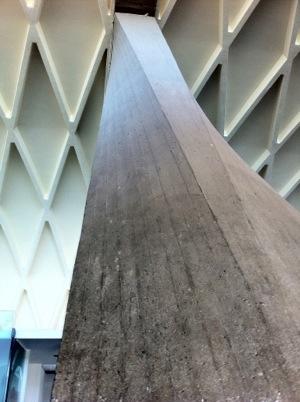