. Turin, again, with expert guidance from faculty at the Polytechnic, where there is also a small but devoted group of Nervi scholars. I came here last year to see the Palazzo del Lavoro (still rotting away while a plan to develop it as a shopping mall founders in legal limbo) and the first of the two halls Nervi designed for the Fiat-sponsored Esposizione in 1949. The second hall, done a few years later, is smaller but even more refined, with a poured-in-place set of inclined arches and a ceiling of precast tavelloni that open up at the base to let in an incredible amount of sunlight. 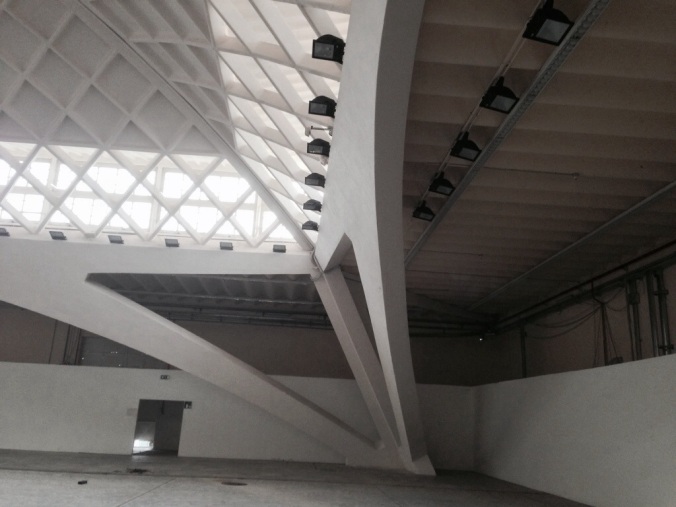 . This was an important project for Nervi, as it combined the diamond geometry of the aircraft hangars he did in the 1930s with the lightweight prefabrication he had experimented with during the war–and deployed successfully in the first hall. The result is even lighter and more breathtaking than it looks–because of the perimeter lighting, the solid roof really does seem to however above the space, even while you intuitively read the poured-in-place ribs as serious bits of structural and lateral support. It’s totally resolved–structurally, constructionally, and compositionally–one of the best spaces of his I’ve seen, and one I have to admit underestimating so far.

Daylight is one theme that I’m trying to sort through. Unlike most engineers of his day, Nervi always seemed to find a way to integrate natural light with his structural designs. Light punctuates his structure, helping to distinguish, in this case, between elements that span and elements that support. The perimeter curtain wall at the Palazetto does the same thing. But in both cases the visual separation that light creates also gives the roofs this uncanny sense of floating above you, very different from some of the heroic long span structures of the day. Not sure where that bit is going, but it seems to crop up again and again.

. We did take a few minutes to revisit the earlier hall, too. Last year it was full of a dinosaur exhibit, which was not in-awesome, but did get in the way of the pure, publication-worthy shots I was after. A little cajoling got us into the upper galleries, where you can see the poured-in-place buttresses really well (and in some places where the paint is peeling, you can see that they were originally…yellow…). The formula here is the same as that in the later hall–poured supporting elements that get out of the way of circulation below, lightweight precast elements connected by poured ribs forming the roof. Here, of course, the daylight percolates through the structure itself, not quite the same as in the C hall, but another idea that he came back to several times, including the Papal Audience Hall. 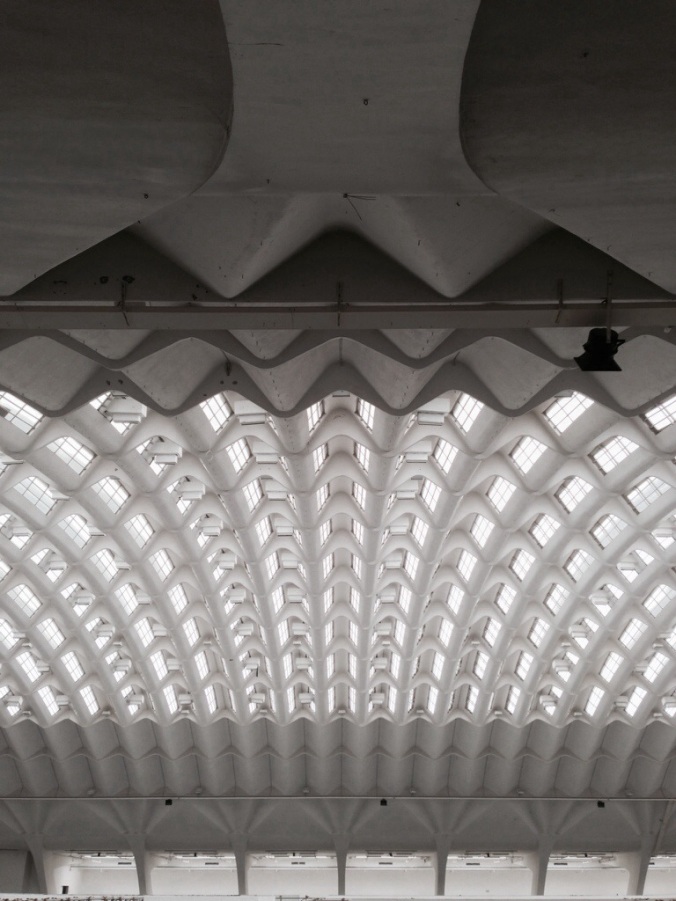 . All of this is no less wonderful for having seen the first hall last year. Both are now completely disused–the C Hall was last occupied for the Nervi addition in 2011, and the B Hall has done time as an exhibition space for contemporary art and as a temporary display space for the Italian Museum of the Automobile, which was entirely appropriate since it was originally designed to exhibit cars. All of that is gone now, and there are even bits of it that haven’t been touched since the 2006 Olympics–signs and temporary drywall that turned some of the perimeter galleries into offices. Turin has suffered since then from Fiat’s relentless move to move production to Eastern Europe and from a declining population. But it also suffered from a surplus of large exposition spaces, from the 1961 centenary to the Olympics. There simply isn’t enough going on to pack the number of big spaces like this in the city, and that’s worrying from a preservation point of view.

We did hook up with a group of itinerant students from the Bartlett whose studio task this year is to re inhabit abandoned urban spaces in northern Italy, so hope springs eternal. But the money simply isn’t there to seriously re-imagine some of these spaces, and in a climate of enforced austerity it’s hard to imagine that happening over the next five to ten years. But the opportunities are amazing if these structures can hold on. 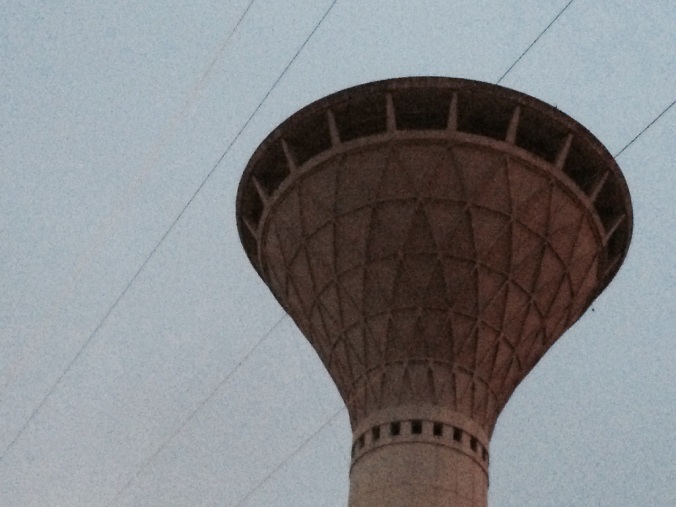 . For instance. The water tower at Mirafiori, the declining home of Fiat’s production. Nervi did this one in the late 1960s–you can see the precast tavelloni pattern on the conical tank even through the graininess of a post-sunset dashboard shot. And above that? The openings between the tank and the roof were a restaurant, accessible by elevator, from which you could see the entire factory–impressive enough, given the scale, here–the entire city, and in the distance the Italian Alps. Totally empty now, and owned by a skittish French company that in no way, shape, or form, is interested in letting a couple of Nervi scholars into it.