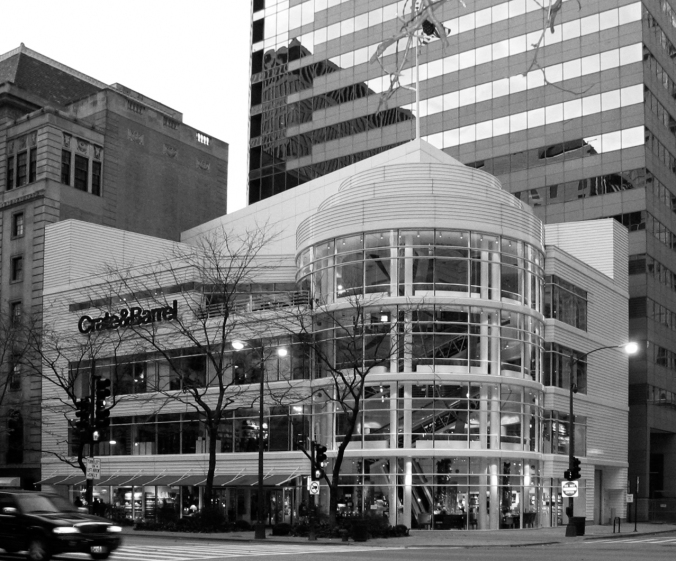 Passing of an icon, sort of.

The Tribune reports today on the last days of Crate and Barrel’s flagship store on Michigan Avenue.  The 1990 building by Solomon, Cordwell, Buenz is going to be converted into the world’s largest Starbucks, which means that the building’s crisp, white presence on the Magnificent Mile will be maintained, albeit accompanied by hundreds of gallons of Pike’s Place roast.

Like a lot of architecture graduates in 1992, I spent much of the summer under-employed, and when a city planning internship ran out (there’s a Home Depot in Tallahassee, Florida with an awesome parking lot, let’s just say), I had a few months to kill while waiting to hear about what turned out to be a job in London.   I needed a short-term gig, and I signed on in C&B’s barware and silverware department.  It wasn’t an ideal match–customer service ended up not being one of my strong suits–but the store was kind of a great place for a novice designer to hang out, full of Scandinavian-influenced housewares, pretty tastefully done retail displays, and permanent staff who knew a lot about what they were selling.  To this day I’m a flatware and barware snob, and I’ll complain about restaurants using stamped versus forged silverware if the occasion calls for it.  The building, too, was a particularly comfortable place to be even for hours at a time.  It definitely reflected the C&B ethos–functional, clean, elegant, and without a lot of wasted effort.  The rotunda at the corner even nodded, a bit, to Sullivan’s Carson’s store, and you could tell that shoppers from out of town genuinely enjoyed the escalator ride through it up to the furniture departments.

I lasted exactly one holiday season, which included helping a former (and so far un-indicted) state governor select candle holders, and then the London job came through. I handed in my sales apron without too much regret, but have bought plenty of C&B stuff ever since and felt pretty good about it.  And, knowing where the rest rooms in the building are with complete certainty, I’ll admit to marching a couple of toddlers in there during winter trips downtown more than once in the distant past.

Starbucks is kind of an ideal tenant for the building–apparently their CEO had approached Crate and Barrel years ago about opening up a counter in the store, and the vibe of both places is kind of similar–nothing outrageous or too fancy, but mostly tasteful product that gets the job done, stays out of its way, and offers a bit of style in the process (ignoring, for the moment, something like a pumpkin-spice latte).  I’m kind of looking forward to my first coffee overlooking Michigan Ave. from vaguely familiar haunts, and I’m assuming that the renovation won’t move the plumbing core, so that bit of important city knowledge will live on.  Kind of a refreshing change to see a nearly 30-year old building dodge obsolescence and get new life.

2 thoughts on “crate and barrel”