A chilly, grey morning in Rome yesterday where, thanks to the persistence of the team leading the Getty Foundation-funded project on the preservation of Nervi’s Stadio Flaminio, I got to see this smaller Olympic stadium first hand, without having to jump a single fence.  There’s a lot of work to be done if the stadium is to be salvaged, but there’s promising news in among the abandoned spaces and spalling, waterlogged concrete.

The stadium was built from 1957-59 within the footprint of an existing 1911 structure.  Nervi was constrained not only by the physical space available to him, but also by the pending Rome games in 1960.  The stadium seating consists of an ingenious matching of poured-in-place frames, each with a similar central portion and cantilevered arms, and pairs of precast spanning beams.  One of the beams in each case was cast to form a seating bench, the other to fit underneath and channel water to drainpipes along each of the main frames.  The most spectacular element, though, was the flying cantilever roof over the grandstand.  To save weight and time, Nervi fabricated this roof out of ferrocemento elements that taper from a deep eve-shape at their root, to a thin edge at their ends.  Steel pipes filled with concrete provide sloping struts toward the back of the roof, minimizing the number of obstructed view seats while adding a structural grace note to the whole composition.  Circular porthole windows allow daylight to filter down to the pricey seats below, but they also eliminate a considerable amount of dead weight around each vee-shaped element’s neutral axis, a classic Nervi integration of structure, construction, fabrication, and architectural effect. 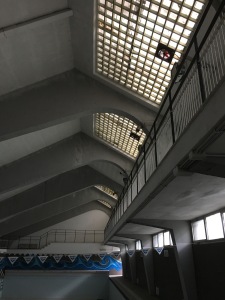 Underneath the seats is a world of small gymnasia that slide between the main spans of the poured-in-place framing elements.  The most famous of these is the piscine, or swimming pool, that is the best preserved of these.  For years after the Olympics it served as a neighborhood leisure center, a rare example of a purpose-built stadium for the Games that actually went into community service.  But it, too, is now abandoned, though only recently.  Here, again, Nervi was clever enough to mediate the pure structural form of the sloping frames with an architectural touch, angling the perimeter walls to more gracefully meet the seats above, and then filling these walls with glass panels to maximize the amount of daylight the space received.  (Among other uses, one of these undercroft gymnasia served as a warmup gym for boxers, who fought preliminary rounds in the neighboring Palazetto dello Sport.  One of those boxers was a young Kentuckian named Cassius Clay…) 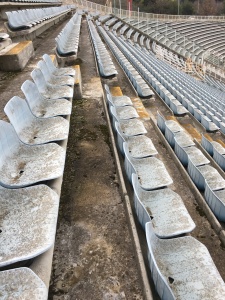 The stadium was last used by Italy’s national Rugby team, though this relationship ended when plans to expand capacity beyond its current 32,000 seats were nixed.  While the stadium served as home for the team, it was renovated to meet code and league standards, which required each ticket holder to have an actual seat.  Plastic seats were bolted into Nervi’s elegantly profiled precast benches, and–unconscionably–the drainage system was sealed off, allowing water to stand on the surfaces of the upper precast.  Meanwhile, the thousands of bolt holes drilled into the benches have allowed water to infiltrate into the now-sealed space below, leading to percolation throughout the spanning structure that’s evidenced by efflorescence and surface moisture and discoloration throughout.

The good news, such as it is, is that the structure is at least intact.  Expansion plans would have violated the graceful curves Nervi was able to achieve that maximize seating between the end zones.  What use the stadium might be put to is a good question–rugby’s popularity has died off in Italy since 2010, and the team now plays in a much smaller stadium near EUR.  Serie A football demands larger seating capacities–Flaminio’s would max out at its originally intended 55,000.  Minor league football is an option, but the best argument for preservation might be the gymnasia on the lower level, which could all serve the growing, gentrifying neighborhood around it.

Whatever uses may be out there, the urgency right now is to document the structure’s health problems, and to convince the municipality of Rome that there’s a useful, historic building that’s worthy of its investment here.  Elisabetta Margiotta Nervi, of the PLN Project, and Francesco Romeo, from the Università di Roma, are leading the Getty-funded project, and have asked me to contribute a history of the stadium and its relationship to sporting culture and stadium architecture of the 20th century, as a way of showing that the innovations on display here were culturally and socially important, in addition to their architectural and engineering legacies.  It’s a beautiful, though now slightly haunting, place, and after years of trying it’s both thrilling and humbling to poke around its ruins, imagining what it once was, and what Rome might be able to do with it.