A remarkably good piece in this morning’s New York Times about last week’s fire in Grenfell Tower in London.  The mechanics of the fire were instantly apparent from videos and photos–fires climbing the exterior of a high-rise have become common in the last couple of years, and they’re symptomatic of flammable cladding materials.  Once ignited, polyethylene insulation (in this case) burns quickly, and the heat it generates causes a chimney effect in the confined space between the building structure and the sheets of aluminum or whatever other material forms the outside shell.  Rising air feeds the fire with oxygen, the process accelerates, and if this occurs above the reach of firefighters’ ladders and hoses there is no way to extinguish it.  Two fires in Dubai in 2014 and 2015, and incidents in Scotland, Australia, and the U.S. have all demonstrated the same fire behavior, and making the exterior skin of a building fire resistant, or at least incombustible, has always been an important element of building codes.  It’s life safety 101. 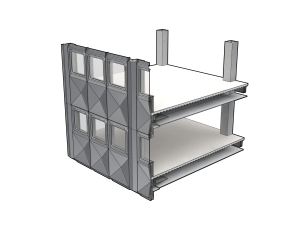 We’ve actually been looking at similar details in postwar building skins this year in our research group, and one building in particular stands out as an example of how thin metal skins should be composed for fire resistance.  The Alcoa Building in Pittsburgh (1953) pioneered the use of sheet aluminum as a cladding material, installed over a concrete-covered steel structural frame.  If you look closely at the digital model, you can see that the  floor plate hits a vertical band of metal panels (stamped with an “x” shape) that are backed up by solid precast panels.  These panels stick up and down from the edge of the floor, and they’re designed specifically to keep fire from spreading from one floor to the other.  Any insulation is on the interior of the panels, and the space between those panels and the aluminum skin itself is broken up by firestops at the floor levels (and by the window frames).

Code requirements for those upstand and down stand fireproof panels were seen as pretty conservative in the 1950s, and in fact Inland Steel in Chicago was among the first projects to get around the typical understanding of even a glass curtain wall as a plane of solid, fire-resistant material punched by glass windows.  Inland got away with a lot, including exiting requirements, but its curtain wall passed muster by reducing the fireproof panels to simple spandrel covers that extend only over the depth of the building’s edge girders.  While codes relaxed considerably, allowing cladding systems that wouldn’t necessarily have stopped a fire, this came in an era when other technologies–building sprinklers in particular–came along that could have.  Provisions to prevent the building skin from contributing to a fire included requirements that the exterior materials be at least fire resistant, and that cladding systems include firestops–horizontal bands of fire- and smoke-proof material that would keep fire from spreading up through voids within the curtain wall.

We often talk in tech classes about how difficult it is, in today’s regulatory environment, to get a really serious building fire going.  Codes have developed into good balances of conservative practice and common sense.  Sprinklers activate when a fire is detected, and the size and composition of spaces are calibrated to contain fires for at least an hour–and in some cases up to four.  Meanwhile, all building spaces with a population of over 50 are supposed to have two exits, so that occupants’ routes aren’t blocked, and alarms and fire drills are supposed to notify anyone in a burning building, and to give them an intuitive sense of what a safe route out of the building should be.  People complain about the onerous requirements of codes, and they resent the time and disruption of fire drills, but put together these represent advancements in life safety that rival, say, vaccinations for the positive impact they’ve had.  People simply hadn’t been killed in high rise fires in jurisdictions that had up-do-date codes for decades.  When this did happen–as in the Brunswick fire in Chicago in 2003–it usually highlights shortcomings in the code.  (In that case, the building had been grandfathered in and had no sprinklers–an oversight that remains a problem in Chicago).

So, what went wrong at Grenfell?  In a word, everything.  The tower had been re-clad recently, and anti-regulatory sentiment had moved the U.K. and local governments to devolve enforcement of fire codes to a form of ‘self-policing.’  A financially strapped contractor made a substitution to the original specs for fire-resistant insulation, which is more expensive.  The tower itself was originally built in an era of fiscal austerity and a desperate need for new housing,  and inattention to basic exiting principles meant that the tower had a single staircase.  Worse, residents had been instructed to remain in place on the upper floors in the event of a fire alarm–good advice for a typical building fire, which spreads from the inside out, assuming that walls and doors have proper fire resistance.  But, in this case, residents would have been better off evacuating away from the inferno taking place on the exterior, and toward the relative safety of the interior stair.

The blame here is stunningly obvious, and various activists have pointed out that collusion–inadvertent or not–between politicians promising to “cut red tape” and industry suppliers, installers, and contractors seeking to provide the cheapest possible alternatives led in this case to consequences that, given the cladding fires of 2014-2015, should have been readily apparent.  Particularly galling is the culpability of Arconic, the supplier of the flammable cladding system.  Arconic is the re-branded name of Alcoa, the Aluminum Company of America, whose metal-clad headquarters were built in 1953 with proper fire-resistant principles in mind.  Their marketing materials for the system installed on Grenfell suggested that it was an inappropriate choice for high rises because of this danger, but in Britain this was tempered with a phrase deferring to local building codes.

If, as in this case, those codes have been decimated by political maneuvers to ease the profit-making of the building industry at the expense of the citizens living in proximity to such bureaucratic indifference to human life, then even the supplier has to bear ethical and moral culpability for this disaster.