Catching up after a busy month, highlighted by a symposium on the forthcoming re-issue of Aesthetics and Technology in Building that featured almost all of the authors contributing essays to the project in Venice.  Hosted by Venice International University, we were also fortunate to have Francesco Dal Co, from IUAV, offer some remarks on Nervi and the culture of technology and architecture prevalent in the postwar era.

The book is scheduled for publication in Fall, 2017, so this was the first in what we’re hoping will be something of a world tour over the next year.  We’ve just submitted the final final texts and illustrations, and couldn’t be more excited about bringing a classic text back to the bookshelves–or, at least, the affordable bookshelves.  My own first edition set me back $300 or so about 20 years ago.

The roster of authors is a construction history and Nervi scholarship list of all stars.  It’s also nicely international.  Alberto Bologna has contributed an essay on Nervi’s relationship with America, which was a uniquely apropos market and also a source of great inspiration.  Gabriele Neri has written a biographical essay that will reintroduce Nervi and his career to the English-speaking world, and Jo Abram has written a concluding essay that places Nervi in the context of postwar progressive thought and technology.  Elisabetta Margiotta Nervi, president of the PLN Foundation, Cristiana Chorino from the Polytechnic University of Turin, and I have essays that frame the project and the original Aesthetics and Technology in Building, the results of Nervi’s invitation to deliver the Charles Eliot Norton Lectures in Poetry at Harvard in 1961.

But I think we’re all in agreement that the centerpiece of the new book (aside, of course, from Nervi’s brilliant four chapters) will be Roberto Einaudi’s historical essay on how the Norton Lectures and the book came to be.  Einaudi was an undergraduate student at Cornell when he took a semester off to travel to Rome and to sit in on Nervi’s lecture classes (this after spending a summer working for Louis Kahn.  He and I have had a lot to discuss).  His transcriptions of those lectures have been published in Italy and give a rare insight into Nervi’s philosophy–and standing as a teacher.  For this project, Einaudi has written about being drafted into translating Nervi’s lectures (as a graduate student at MIT in 1961, Einaudi was again in the right place at the right time) and then working with him to refine those into ATB’s essays.  This will be an important document in its own right, but it’s also a great story, and very much a portrait of the sophisticated but very down-to-earth person that Nervi was. 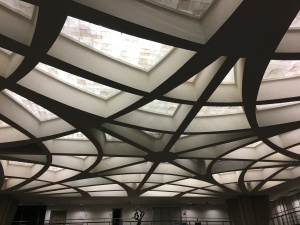 The day was highlighted by a visit to the Cassa di Risparmio, a branch bank designed by Nervi and Scottolino that features a large isostatic-shaped slab (top photo in the post) over the banking hall.  It’s a building that’s practically hidden in plain sight–just a short walk from St. Mark’s but deeply embedded in the daily life of the city and not on any obvious tourist trail.  Seeing it in such esteemed company was a rare treat, but of course the chance to travel to Venice is its own reward, especially at moon high tide.