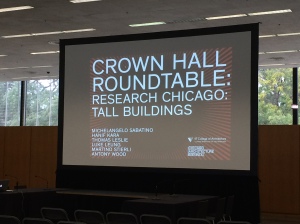 A quick but enjoyable trip to the south side over the weekend to take part in a roundtable discussion on skyscraper innovation as part of the Chicago Biennale.  IIT and the Council on Tall Buildings and Urban Habitat put together a great panel to discuss the idea that Chicago has been the “Silicon Valley of the Skyscraper,” a claim that certainly rings true.

So, is it?  The question dovetailed neatly with the discussions we had as part of my summer gig at Hanbury Evans Wright Vlattas in Norfolk, VA.  There, the question was how firms could nurture a more innovative culture internally and externally–changing practices while changing cities–and the required reading was Walter Isaacson’s brilliant history of Silicon Valley, The Innovators.  Isaacson’s point was that the Valley happened because three things came together–creative ideas, engineering talent, and “business savvy plus deal-making moxie.”  In other words, the creation myth that billion-dollar companies simply sprang out of garages because of something in the water supply doesn’t tell half the story.  Indeed, not even a third of it.

Chicago certainly had all three of those things in the 1890s and the 1960s.  And it has them today, too.  Ideas, execution, and a healthy stash of money in the form of real estate investment flourish in the city (as reported earlier this week).  But there are more specific factors at work, too.  In addition to Isaacson’s book, Martin Kenney’s, Understanding Silicon Valley: The Anatomy of an Entrepreneurial Region, published in 2000, gave a recipe for how similarly innovative cultures might grow up:

“A leading role for local venture capital; a close relationship between local industry and the major research universities of the area; a product mix with a focus on electronic components, production equipment, advanced communications, instrumentation, and military electronics; an unusually high level of interfirm cooperation; a tolerance for spinoffs; and a keen awareness of the region as existing largely outside the purview of the large, ponderous, bureaucratic electronics firms and financial institutions of the East Coast.”

IIT certainly provided the research in the 1950s, though it was the farther-flung campuses in Urbana-Champaign and Madison that did the job in the 1890s.  Today, that research often happens in-house.  The product mix in previous generations was represented by the local steel industry, which allowed knowledge to flow back and forth between desks and fabrication floors.  Cooperation and spinoffs have always been hallmarks of the city’s structural design community–journals like Inland Architect and the Journal of the Western Society of Engineers were among the most ‘open-source’ outlets in the country (and the latter was among the first to take a publication-ready interest in the work being done by the Wright Brothers in 1903-5).

The final element of Kenney’s recipe, the healthy disregard for the traditions and bureaucracy of New York in particular, is one of the more common reasons given for Chicago’s culture at the turn of the century.  That’s harder to quantify, of course, but the freedom to innovate was certainly pushed by the frontier mentality of the era–with no need to satisfy the pretensions of clients, this argument goes, the stultifying aesthetics of the McKim, Mead, and White wing allowed far freer designs and thus more inspiration from the wide windows and narrow steel columns that new technologies offered.

As I’ve shown elsewhere, that wasn’t entirely true, but it’s close enough.  Chicago has always had a reputation, in some cases self-promoted, for defying convention and for being willing to explore more radical possibilities than its more traditional big brother out east.  That’s not so much the case today, when super-skinnies and other new typologies are emerging from offices in New York and throughout the world.  But Chicago’s home base–Thornton Tomasetti, Halvorson, SOM, and Smith/Gill among others–continue to find innovative ways to build tall, and to secure the city’s reputation as, if not the Silicon Valley of the skyscraper, at least one outpost of a global “Valley.” 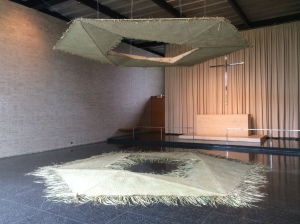 And, as for creative centers?  IIT never disappoints.  The Biennale found ways to inhabit, highlight, and critique some of the city’s own sacred cows…