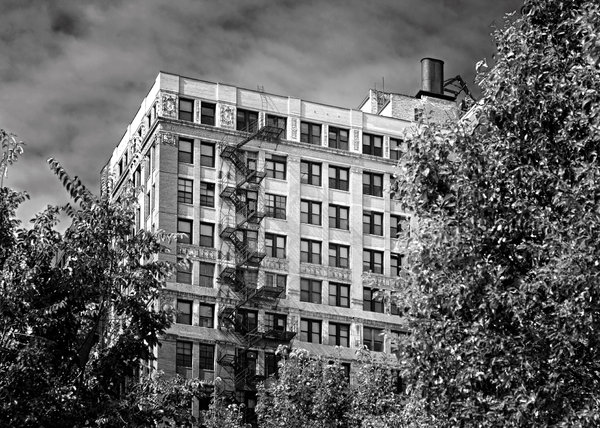 The best part about lecturing to the Chicago Architecture Foundation’s docent class is that the talk itself is kind of a formality–the Q&A afterwards has always been extensive and tons of fun.  Their questions are invariably either tough ones (can we even say that the Monadnock is a “masonry” skyscraper?  That one occupied us for a good fifteen minutes.  Answer: sure, but it’s more accurate to say that it’s a transitional one that uses a hybrid of masonry and steel to stand up against both gravity and wind).

In March, 1898, a fire broke out in the Ayer building, a seven-story, heavy timber-framed building on Wabash St.  The fire’s spread was rapid and intense–it shattered plate glass windows across the street–and it occurred in the middle of the day when the structure was fully occupied.  More than a dozen occupants lost their lives.

While most of the press coverage focused on the shoddy construction of the building and a small light court that formed an effective chimney, a subsequent fire in the Shoreman building, between the Manhattan and Old Colony buildings on Dearborn Street, highlighted a fire escape itself as the cause of several deaths.  Occupants leaving the upper floors via a narrow iron ladder attached to the rear of the building were forced to descend past windows on the fire-engulfed lower floors.  The ladder had become “a skeleton of red hot iron,” forcing people to jump or burn to death.  Those in the Shoreman–which burned on a weekend–had been luckier:

““Had all the usual occupants of the Shoneman Building been at work, it is probable many would have found themselves in the same predicament as the hapless tenants of the Ayer Building… The fire escapes in both cases consisted of a narrow iron platform at a window on each floor and an iron ladder close to the window and scarcely twelve inches from the wall, where the flames made it red hot in an instant after they broke through the window. Luckily, most of the tenants of the Shoneman Building had an opportunity to get down the iron ladder before the flames got at it. (“Fire Ruin at Noon.” Chicago. Mar. 22, 1898, 5).

Subsequent agitation for improved fire escapes inspired code provisions that made minor adjustments to requirements for exterior stairs, requiring them to be moved “far enough away from the window to prevent its heating even after the flames break through the windows,” (ibid.).  But cold weather, rain, water from firefighters hoses, and lingering exposure to heat, smoke, and flame made these escapes dangerous enough that by 1907 architect F. W. Fitzpatrick made a radical suggestion covered by Inland Architect:

“A valuable suggestion for the preservation of life and property comes from Architect F. W. Fitzpatrick. This refers to the main stairway which as usually planned and constructed affords great facility for the spread of flames throughout the building. This danger point it is suggested should be made of incombustible materials, and be used as the fire escape of the building. The fact that it could be made to perfectly serve as the fire escape would be a strong argument with the owner to consent to the construction of the main stairs with enclosures being of fire-resisting materials. The enclosure would need to be provided with self-closing fire doors at each landing. The stairway should lead directly to the street or into a fire-proof corridor opening to the outside, and having no openings not protected against fire. The stairway enclosure so built would constitute a bulwark against the spread of fire from floor to floor, and on this account alone would justify its fire-proof construction. The added advantage that it would form the best possible fire escape, and save the expense of any other, would be a further strong factor in favor of its being made incombustible. Changes are urged in municipal ordinances to require such construction. The advantages are so great and direct that the movement should meet with little opposition.”  (“Fireproof Stairways as Fire Escapes.” The Inland Architect and News Record. Vol. L, no. 2. August, 1907. 14).

This suggestion lingered for a long time–as late as 1927 the AIA and state fire marshal were agitating for internal fire escapes only, following New York City’s lead.  (“Calls Outside Fire Escapes Public Menace,” Chicago Daily Tribune, Dec. 4, 1927.  C1).  Enclosed fire escapes, surrounded by fire-resisting walls, were finally made mandatory in the city in 1938, though older buildings were grandfathered in.  This means that iron fire escapes still provide last-resort exiting on older buildings throughout the city, but they’re also one more building element that marks the change between pre-Depression and post-war skyscraper construction.

Two final interesting notes: in both the Shoreman and Ayer fires, many survivors successfully rode building elevators to safety, albeit with crowding and stampeding for the cars reported in both cases.  And the Ayer building’s site, after being cleared of the rubble, served as the site for a replacement that is an exemplar of the “expressed frame” and Chicago window formula that would dominate the coming decade…and yes, that’s a patently hazardous steel fire escape hanging off of the southernmost window bay.  Some lessons took a long, long time to be fully learned… 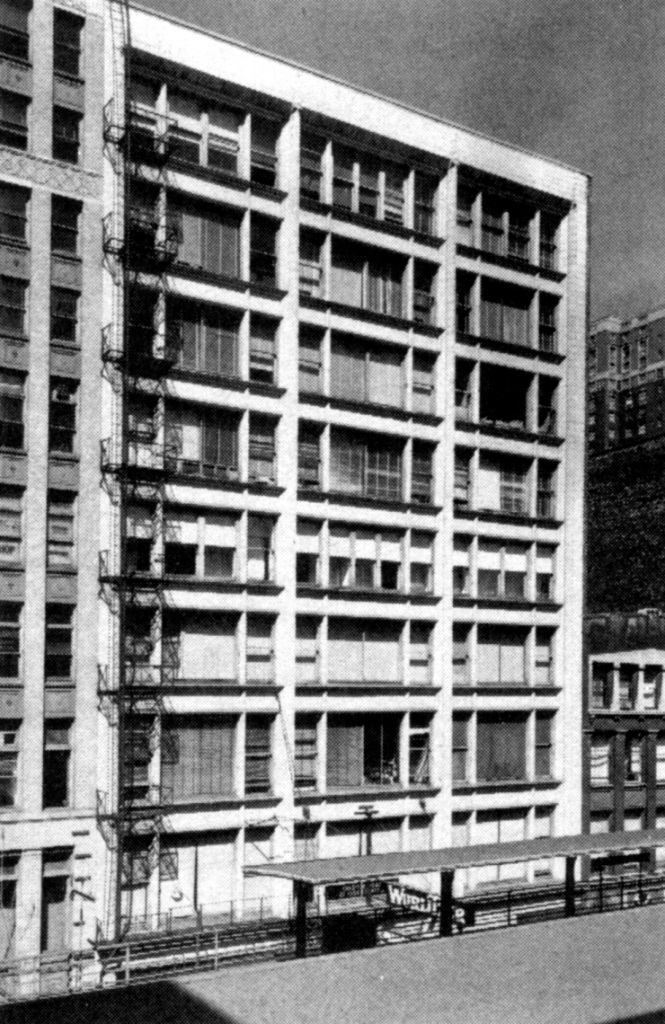