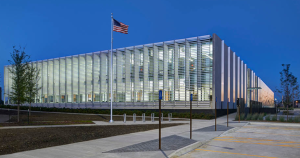 A great evening last night as I got to host the AIA Iowa’s annual awards banquet and remind myself about just how good things get here.  The local NPR station is running a series this week on how surprising Iowa is to visitors–what, you didn’t know that Des Moines regularly gets ranked as the best city in the country for young professionals?  That Ames and Iowa City both regularly make top five and ten lists for best college towns in the country?  But to those of us who live here, these things are never surprising–the state is a great place to live and work, and the architecture community here isn’t so much small as it is intense.  And the work that gets done here is consistently good, inspired both by place and by the times.

This year’s Honor Award for Design went to Iowa City/Des Moines firm Neumann Monson for their Des Moines Municipal Services Building.  This is a classic Iowa project, a public facility, done on a municipal budget, with no dramatic forms or flying object but instead a simply conceived, well-diagrammed, and immaculately detailed volume that is full of good spaces for people.  It’s facade reminds me (of course) of Nervi’s Palazzo Lavoro, but it’s really just a nicely designed solar screen that Neumann Monson’s designers realized held the potential as a signature for the building and thus for the city.  Marlon Blackwell, the Awards program’s outside juror (also a great speaker and, thank goodness, a good sport about being called upon to spontaneously talk about the winning projects) described it as “resolute” at all three scales he found important–urban, architectural, and that of “the hand.”  Couldn’t agree more.

That building, though, was just one of a number of projects recognized for design excellence and sustainability.  Not to mention three national recognitions this year for Young Architect, CACE Executive, and a COTE award for BNIM’s Iowa Utilities Board, which has proven itself over the first two years of its life as a genuinely efficient building that is also an extraordinary place to work.  Only fitting, too, that BNIM’s Des Moines leader, Rod Kruse, won this year’s state medal of honor.

There is in all of these projects an ethic that may not be uniquely Iowan, but is nevertheless characteristic.  Kruse talked about the state’s architectural forefathers–Chick Herbert in particular–whose careers continue to set the tone here for practice based on a profoundly ethical approach, an attention to detail and to people, and a genuine sense of collaboration.  Walking in to the dinner last night, I realized that even as a peripheral member of the practice community, I knew most of the people in the room one way or another.  ISU is the only architecture program in the state, so our alumni make up a huge percentage of the practice here.  But it’s also true that the profession is profoundly engaged in what we do in Ames, sitting in on reviews, hiring our students, attending alumni meetings and being involved in all kinds of more casual ways.  It’s a great community with which to be involved, and I was honored to be present to help hand out recognitions to the most remarkable examples of the last year or two.