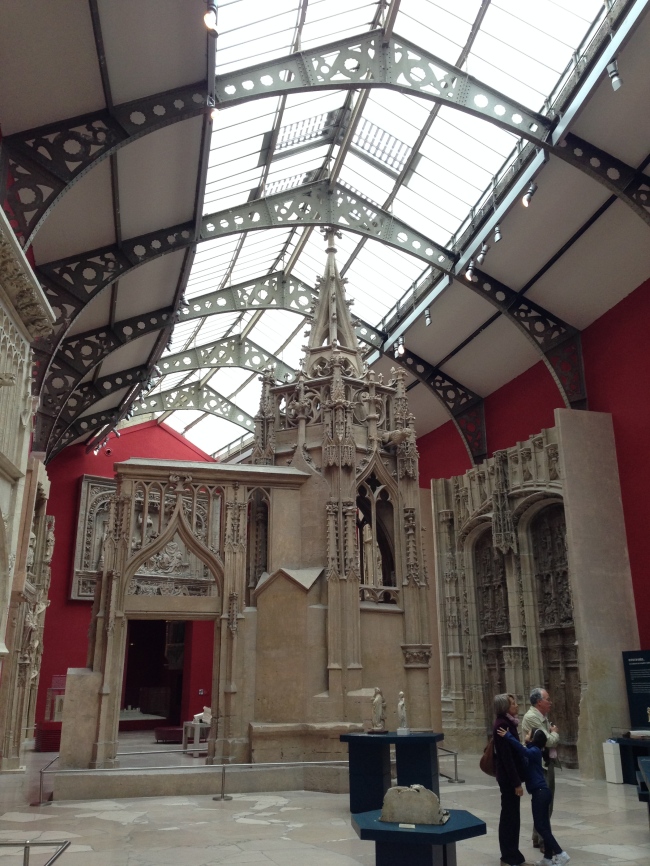 Catching up with a structures colleague over Mozart and gothic architecture Friday night (thanks for the suggestion and the tix, Marci~!), she asked if I’d been to the Cité de l’Architecture et du Patrimoine in the Trocadero yet.  It was the second time someone had gone out of their way to mention it, and I had to confess I’d put it pretty far down on my Paris list.  Architecture museums can be great (CAF!), but they can also be a drag–compared with actually being in a cathedral, who wants to just see casts and models, right?

Well, this one is in the great category.  That’s the cast hall, above, which is very much like a typical glyptotheque, but all of the examples on display are from gothic, not classical, buildings.  There’s a fairly complete history of the gothic styles, and an extraordinary range of antique models.  (The one of Beauvais?  Held up by wood and metal struts, just like the real thing).  “Flamboyant” gothic?  Comes from the doubly-curved, flame-shaped motif that appeared everywhere after 1350.  The casts alone take up an entire floor of the Trocadero, the art deco hemicycle across the river from the Eiffel Tower.

But then the second floor is wholly devoted to the 19th and 20th century, and there’s some absolutely amazing stuff there, from models and drawings to full-size replicas of key bits.  The rhetoric is pretty clear–there’s a French tradition of building that goes from the gothic directly to the 21st century, one that’s taken construction, structure, and materials seriously (for the most part–there’s plenty of Portzamparc, too).  So that’s Viollet-le-Duc’s unbuilt assembly hall in the foreground, with Perret’s Notre Dame du Raincy represented by a replica of a concrete/stained glass panel in the background.  Talk about a mashup.  (And, to the left there, an exhibition display from Systeme Hennebique from 1913, featuring a just-copmleted bridge in Rome…)

The biggest surprise is a full-scale mockup of an apartment from the Unite d’Habitation.  Surprisingly roomy, given its reputation.

They have a third level devoted to temporary exhibitions, right now featuring Jean-Louis Cohen’s outstanding Architecture in Uniform, about architects’ and designers’ involvement for better and worse in WWII.  And a good bookstore, which is a bit lighter after this weekend.  Highly recommended–somewhere below the Pompidou and Notre Dame itself, but perfect for a rainy weekend day.  And, you know, the views from the outside aren’t so bad, either…