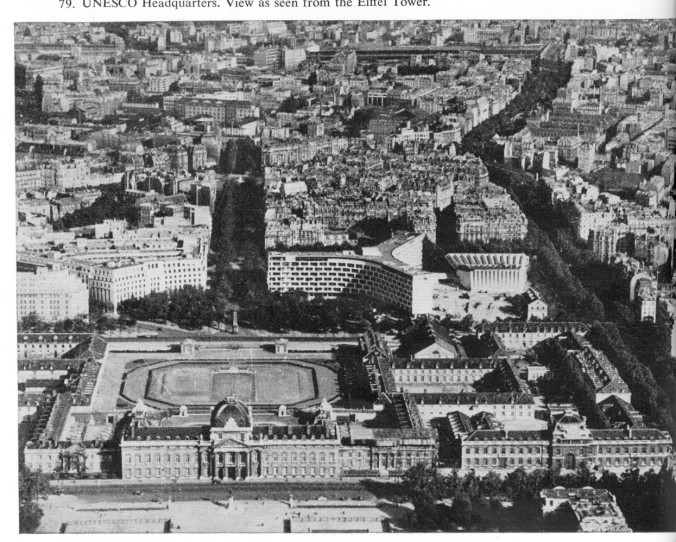 The excuse for a few weeks in Paris is the archive at the Nervi- and Breuer-designed UNESCO.  Like any large international organization, they took their paperwork seriously, so there’s a lot in terms of meeting minutes and diplomacy; about half of what I’ve seen so far has involved seating charts and speaking scheduled for the opening.

But there’s also genuinely interesting correspondence about the origins of the scheme.   (Actually, Beaudoin was hired as principal architect well before Nervi and Breuer were involved–his plan for the Place Fontenoy site was ripped apart by the committee of five consulting architects, including Saarinen, and he was subsequently dismissed.  The site was then moved briefly to the Porte Dauphin site, and then quickly back to Place Fontenoy.  Beaudoin did adhere strictly to Gabriel’s plan, which–unsurprisingly–did not sit well with Gropius, et al.)

Howard Robertson, a British member of UNESCO’s jury, defended Beaudoin’s plans and publicly dismissed Breuer’s scheme.  And Saarinen, ever the defender of bold form, responded in private with one of his trademark letters–impassioned, gently rhetorical, polite but damning (even gossipy) and, in the end, utterly convincing:

Howard, you are too important a force in modern architecture to get off on a tangent like that. Some of the things you said about the new UNESCO design were pretty severe. I wish we were both in Paris right now, and then we could argue the whole thing out from bottom to top. Actually, I have been somewhat involved with the new design because Breuer, Nervi, and Zehrfuss asked me to come for two short trips as their private consultant during their great rush period.

“No, I don’t think you are right in your severe criticism of their scheme. I think their scheme is very good and inspired. There may be some details that need to be reconsidered, but after all, they had fantastically little time. They are a good team and real artists, and the end result will be a fine building for UNESCO.

“I cannot sympathize with the very forgiving attitude you seem to take towards Beaudouin’s efforts. You know as well as I do from all the ‘partis’ on which he worked that he is an untalented, insensitive man who wandered from one cliche of the thirties to the other, and the final result he produced was a most unhappy looking jumble of architectural forms. Upon seeing his final presentation, it was inevitable that the Five would come to the same conclusion. They had no other choice than to recommend against his reappointment, and UNESCO deserves great credit for following their advice in spite of little tempests that might result.

“The present team of Breuer, Nervi, and Zehrfuss seem to work admirably well together as an enthusiastic triumvirate, and the result will be a credit to all of us in the profession.

“My philosophy about the whole UNESCO job is based upon a conversation I had with Wally Harrison [!] when I went to see him to ask for his advice as to whether I should take on the job of being a consultant. He said that in these international complicated jobs, there are so many involved that it becomes very difficult to achieve an outstanding result and still more difficult to assert one’s personality–too much personal ambition and UNESCO will end up without a building. Therefore, he said, go there, be a consultant, and remember that the first goal to achieve is a building for UNESCO. The second goal is the finest possible piece of architecture. If the ultimate in design cannot be achieved, then let us at least end up with a building for this very worthwhile organization. To me, this was very sound advice by a great statesman in architecture. My feeling is that the design they have now is good–in fact, very good–and we should all help push it so that UNESCO will have a building.”

Interestingly, the aftermath of the competition saw Nervi critique Saarinen publicly and somewhat relentlessly for the architecturally brilliant but statically inefficient Kresge Auditorium (1955) and TWA Terminal at JFK (1962).  Nervi would eventually collaborate with Beaudoin, on an unsuccessful scheme for an office complex in Geneva–a surprising choice given the intensity of the UNESCO debate.  Saarinen, of course, died suddenly in 1961, leaving one to wonder whether a longer career might just have included work with his former ally in the brief, gentlemanly battle of the Fontenoy…