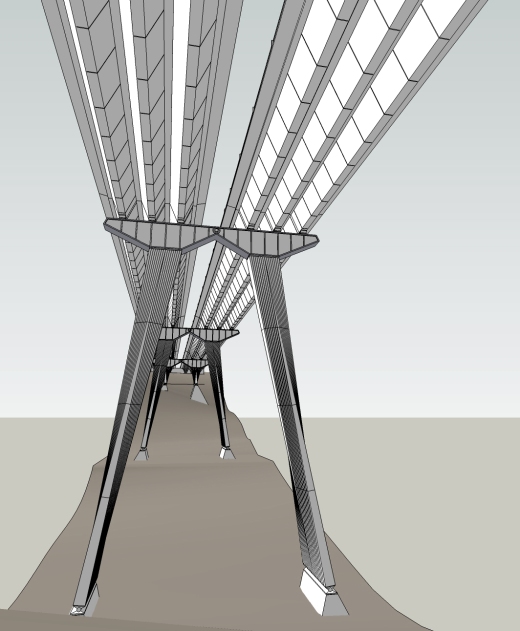 Among the mysteries I’ve been chasing is a single image in the traveling Architecture as Challenge show of a scheme Nervi did for the San Mateo Creek Bridge, on I-280 between San Francisco and Palo Alto.  That’s a bridge that I drove over at least a hundred times while working in the Bay Area, and while it’s an impressive span what’s there is not exactly Nervi.

Sure enough, there’s a whole stack of correspondence and drawings for the project.  It’s a long, slightly tangled story, but it involved Nervi doing consulting work on behalf of Kaiser Steel for demonstration freeway projects.  That’s  interesting, because Nervi’s emphasis on concrete was one of the things that kept him from commissions for the southern portion of the Autostrada del Sole, Italy’s great freeway project that included post-tensioned and steel bridges.

The project was initially just for freeway viaducts, but the publicity Nervi’s schemes generated attracted the attention of the California Department of Transportation, who commissioned Nervi to design steel schemes for a viaduct in Sacramento and the San Mateo Bridge, a 1750′ wide valley on the peninsula.  I’m still working through drawings of the viaduct, but did manage to get enough on the Bridge to throw a quick model together.  The piers are the familiar ruled-surface geometry that Nervi used for the Palazzo dello Sport and the Savona rail station, but for this proposal he designed them out of hollow steel–instead of twisting narrow formwork boards, here the piers would have been made by twisting long, thin steel plates.  The jigs that held the form boards were, similarly, to be replaced by permanent collars at intervals up the piers’ heights.

The deck was to do a similar material switch with another of Nervi’s standard approaches, here taking the profile of the Corsa Francia viaduct in Rome and rendering it in steel plates.  And a giant pair of headers, pinned to one another, would have formed the cross-tie at the heads of the piers.

Pretty impressive stuff, but it never got anywhere–from what I can tell there was initial enthusiasm from Caltrans that faded quickly in the face of unfriendly cost estimators and general bureaucratic inertia.  What was built isn’t bad–and it’s out of concrete, not steel–but this would have been one of Nervi’s grandest works if it had gone ahead.

The best find in the correspondence so far is Nervi asking the engineers at Kaiser whether the bridge should be designed for seismic forces.  San Mateo Creek flows out of the large reservoir on the Peninsula that is formed by…the San Andreas Fault.  So that was a big “yes.”