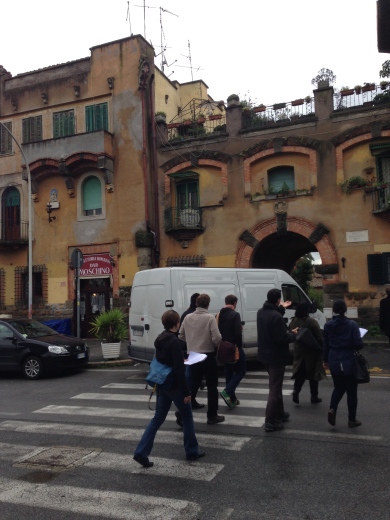 A fine Fellow’s walk this week through Garbatella, a 1920s ‘suburb’ built for displaced workers from the Centro that was wildly successful and that is now one of the city’s most desirable residential quarters.  It’s a neat stylistic history of Italy’s fascist years–neo-Liberty style apartments and facades in the first phases, followed by increasingly rationalist and eventually monumentally Fascist blocks in the later phases.

Style matters less, though, than the cleverness of the plan, which nicely segregates pedestrian traffic from automobiles, provides shared back gardens (now mostly paved over, but still functioning as social spaces), and accessible commercial and social functions like cinemas, shops, and a large church. 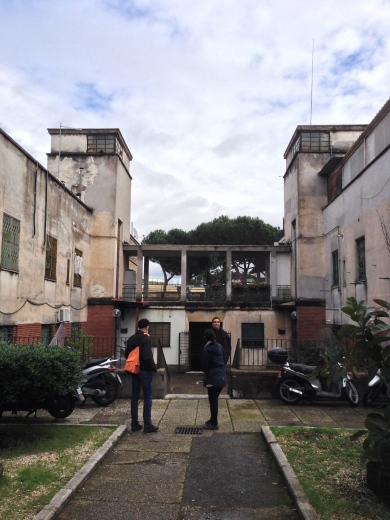 I was happily out of my element–housing isn’t my academic “thing,” but anyone can recognize a good neighborhood when they see it. And the range of styles was a happy thing to see–as long as the basics of pedestrian geometry, residential density and openness, and sight lines get taken care of, you can dress it up however you want.  Some of this stuff has aged better than others, but throughout the place was inhabited, bustling, and clearly alive.  And the rain held off through lunch and a long walk home…at least until about 85% of the way up the hill.