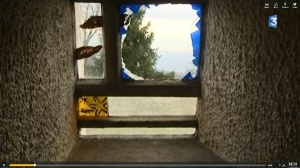 Lousy news out of eastern France this week that vandals/thieves broke into Notre Dame du Haut in Ronchamp by smashing the one piece of stained glass signed by Corbusier in the church.  A broken and discarded collection box suggests it was no more than a spectacularly ill-intentioned robbery, but the incident and the loss of such an artifact has raised alarm among preservationists.

The UK Guardian reports that both William Curtis and Antoine Picon have publicly accused the Association L’Oeuvre de Notre-Dame du Haut of lax security, and more broadly of outright negligence in running the site.  Picon is quoted as saying the ““moisture problems, infiltration and poor preservation of masonry” can all be blamed on a lack of maintenance and attention, while Curtis has gone farther, accusing the Association of “treating this universal masterpiece as merchandise” while failing to adequately direct income from visitors toward upkeep.

While discouraging and shocking, the lax security is neither surprising nor uncommon in this austerity-stricken part of the world right now.  Just last night the dinner discussion at the Academy revolved around the plight of a major Italian museum that has been unable to hire new security guards because of savagely reduced budgets and, simultaneously, ongoing corruption that has kept salaries at outrageous levels.   Programs to hire emergency volunteers to ensure that galleries are staffed–at all–during opening hours have apparently been quashed by the unions.

Picon and Curtis make the point, though, that Ronchamp isn’t really in this category, and that with upwards of 80,000 ticket-buying visitors each year the Association has had more than adequate resources to secure the site with staff and video surveillance.  This puts it squarely in the Pompeii camp; a cultural site that has apparently squandered its financial and cultural legacy on patronage and commercial ventures while its physical fabric crumbles irrevocably.

No word yet on official campaigns or petitions, but the Fondation Le Corbusier has been posting updates…