An unsettling morning yesterday, with a guided walk through Corviale, the kilometer-long housing project in southwest Rome that has symbolized the disillusionment with large-scale social housing for a generation.  It was built from 1972-1981, and it opened largely without services or public transit from its greenfield site into Rome.  Public services intended for a fourth floor sky corridor never materialized, and instead squatters moved in, creating a permanent social rift with official, rent-paying residents.  There’s been virtually no maintenance on the structure, and it has the feel of an inhabited, 21st-century ruin.  Its failure has been the subject of countless studies, proposals, and even films. 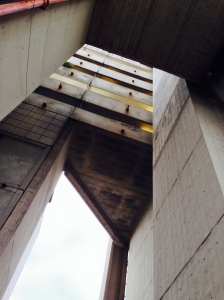 You can certainly see what the architect (Mario Fiorentino, who is also known for the incredibly moving Fosse Ardeatine monument) was going for–the scale should have been awe-inspiring, the eight-story atrium a thrilling space (Iowa State folks will recognize the diagram here, surely, since our College is basically a scaled-down version of the same thing).  But the provision of designated social spaces, the shoddy detailing, the thoughtless circulation all render the architectural idea irrelevant.  Architects who construct fantasies–whether antique or futuristic–forget that people prefer their own stories.