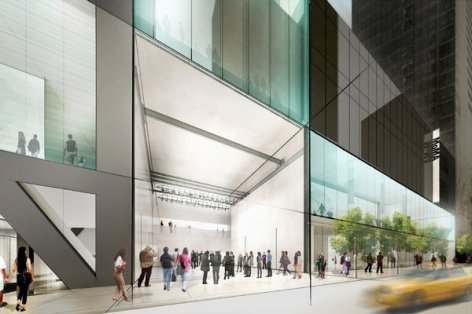 Ugh.  The New York Times reports this morning that after a long “evaluation” process, their architects, Diller, Scofidio, and Renfro, “can’t find a way to save” the 12-year-old American Folk Art Museum by Williams/Tsien.

The Folk Art Museum was, to be fair, a quixotic enterprise, but the building they briefly occupied was hands-down one of the best things to happen in New York in the last decade.  The facade, a tactilely engaging, brooding presence, contrasted nicely with the MoMA shopping mall down the street, and as the larger museum went even further toward a sort of bland, corporate but tasteful minimalism with its 2004 renovation by Yoshio Taniguchi, the contrast offered by Williams/Tsien’s cast-bronze panels was refreshing.

So, as the latest MoMA expansion began to digest more of its block, the alley-wide Folk Art Museum was seen as a likely casualty.  The Museum claimed that its narrow spaces wouldn’t allow for the kinds of displays it wanted to put on, but one suspects that the narrow spaces simply wouldn’t accommodate the “throughput” of customers that MoMA continues to draw.  And the not-so-subtle riposte offered by the hand-crafted facade of the Folk Art Museum was probably doomed from the start politically, too.

Like many “evaluations,” this one had the feel of preservation-washing from the start.  We’ve gotten used to hearing po-faced declarations from owners about responsible consideration of preservation issues, only to find months later that a landmark’s destruction was pretty much a foregone conclusion.  It’s hard to imagine that a firm known for its alleged world-beating creativity (A MacArthur, for heaven’s sake) is suddenly baffled by narrower-than-average gallery spaces.  If that’s really the case, maybe MoMA should bail and host an ideas competition.

Losing a genuine bit of civic sculpture to the “customer experience” of an art museum is galling enough.  But there are a couple of other issues here that strike me as particularly awful.  First is the waste of materials and energy that goes into demolishing a building that’s just twelve years old.  In our emphasis on building performance we consistently forget that building itself uses a phenomenal amount of embodied energy.  Most buildings won’t come close to paying back their carbon debt over a reasonable lifetime, so to take all of this carbon footprint and literally blast it into the atmosphere after less than half a generation seems gluttonous.

Second, when good buildings get torn down, can we at least replace them with something thoughtful?  The “Art Bay”  bears a remarkable similarity to the Apple Store at your local mall.  I like Apple Stores, but I think culture should really flow the other way.

Finally, MoMA isn’t just a patron.  It has defined and curated modern architecture for the last eighty years.  The commercialization of its mission over the last decades has been inevitable–but it has badly diluted the museum’s reputation.  The shows I’ve seen there since the renovation have been modestly interesting, but exhibitions like 2010’s “Counter Space,” on kitchen design, have seemed more sponsor-friendly than really investigative or challenging.  They’ve always had a reputation for caring more about architectural drawings than about real architecture, and the fate of the Folk Art Museum seems to encapsulate that problem perfectly.

I’m not canceling my membership yet, but if this goes through (and, god help us, if it gets any kind of LEED rating whatsoever), I’m not renewing…