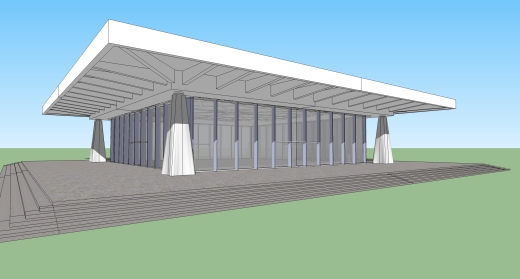 (updated with corrections…it takes a village…)

One of the errands I set for myself last week in the CPAC archives in Parma was to get to the bottom of the “Fermi Memorial” that’s listed in several Nervi catalogues.  There aren’t any published drawings of it, and it (obviously) never happened, but in 1964 Nervi submitted  a design to the University of Chicago for such a thing, honoring Enrico Fermi, the atomic scientist who set off the first controlled atomic reaction on the campus in 1942.

Fermi died in 1954, and there was an international competition held in 1957 for a memorial hall that was to have been part of a downtown development on the block between Illinois, Hubbard,  Wabash (thanks, Kim), and State Streets.  As you can see if you (ahem) walk past that block today, it didn’t happen, but it did attract over 300 entries, including one from Louis Kahn that represented his first collaboration with engineer August Komendant.

So why was Nervi submitting something seven years later?  It turns out he was on the jury for the 1957 competition, and from a few clippings in the Tribune, he seems to have been invited on his own to propose a monument for the site of the original atomic reaction when Stagg Field, the football stadium under which Fermi had his lab (thanks Rick!), was torn down.  Whether this was official or not, Studio Nervi produced three sheets of presentation drawings that more or less would have looked like this (former students will enjoy seeing how my sketch up abilities have progressed, but squint and you’ll get the picture–obviously the archives aren’t keen to have people posting shots of original drawings).  It’s not a brilliant piece of work, but it incorporates two construction types that were very much in the Nervi toolbox at the time: variable section piers that transform from wide cruciform shapes at their bases to round at the top, signifying a fixed base connection and a pinned top connection, and a ribbed slab that incorporates a pattern based on the isostatic flow of forces within (roughly–there’s new research by David Billington’s team at Princeton that shows this to not be quite so simple).  The ribbed slab had been an expedient way to get an efficient and visually interesting pattern using ferrocemento formwork, but it would become an honorific ceiling pattern in the Vatican Audience Hall, still in development when this project was proposed–so for that reason alone the Fermi Memorial should at least be a footnote in the canon.

What’s even more interesting to me, though, is how clearly it references Mies van der Rohe’s 1957 project for Bacardi in Santiago, Cuba.  This was an iteration of his clear span pavilions, supported only at their edges by pillars–usually steel, but in the case of Cuba, the entire structure was to have been concrete.  A major critique of these pavilions has been their extraordinary structural inefficiency, since the piers’ placement at the very edges of the roof essentially maximizes the bending moment in the middle of the roof.  Nervi’s scheme pulled these piers inboard, balancing the main span of the roof with cantilevered spans at the edges–reducing the bending moment at the center considerably.  The glass skin suspended between roof and floor is a pretty obvious quote, but notice the distinction in the ceiling–for Mies, there was an argument here about ‘universal space,’ meaning that the ceiling is rendered in a strict grid–statically inexpressive compared to Nervi’s pattern, which shows the shear forces collecting as they approach the piers.

So, was Nervi channeling Mies?  Designing an homage to the emerging ‘Second Chicago School?’  That isn’t quite as ridiculous as it sounds, as Myron Goldsmith, by this point well-ensconsed at SOM, had been a pupil of both Nervi and Mies.  But it’s also impossible to know, at least at this point.

I’m keen to dig further into this from the other side of the pond–especially since the project seemed to go absolutely nowhere, quickly.  All of Studio Nervi’s drawings are dated in December, 1964–even though the project was announced in March.  And the site proposed in the drawings was in the center of the Midway instead of at the old atomic pile site–that site is in fact commemorated by Henry Moore’s sculpture.  So it’s possible that the University changed its mind about both the site and the nature of the monument.

A nice find–not one of Nervi’s best, but interesting for what it represents…

2 thoughts on “nervi in chicago”