So this is home and work for the next few months…not bad.  For those of you keeping score (Mom and Dad), my studio is the big window on the far right on the piano nobile (OK, OK, second floor).  A couple of us are thinking of asking whether there’s a roster of who has had which studio throughout the Academy’s history…it’s not lost on me that Kahn walked these halls, but I’m not sure whether knowing which studio was his would a) be inspiring, or b) shoot the whole enterprise down…

I’ve gotten unpacked and set up, and even begun piling through a few initial tasks–some Sketch-upping of one key Nervi building as kind of a warmup, in particular.  This is an exercise that was key to the Chicago project, but without a small army of graduate assistants here I’ve decided this is as good an opportunity as any to brush up on the digital modeling skills.  Sort of like David Foster Wallace’s claim that he used to re-type The Great Gatsby word for word to get a feel for truly great writing.  Beyond that, though, it’s a useful discipline to keep reminding oneself that it’s about the buildings.

The project is, of course, just one part of why the Academy invites Fellows.  The other part is the conversations that happen around the place, and those are well underway, too–even if the subject matter thus far is where to get laundry tokens, what time is the IT training session (whoops), etc.  The bigger questions will have to wait until we all have at least one laundry cycle behind us.  (the tokens are at the gatehouse, for future reference).

So, it does feel like settling in to a rhythm here.  It helps that the day gets punctuated by communal lunch and dinner, both around a long table that gets filled with fresh, locally sourced meals.  Breakfast is on our own (and thank goodness for that, since the standard issue Roman breakfast tends toward the stratospheric end of the glycemic scale), but it’s been a welcome break to push the chair back from the desk and to know that this is waiting downstairs: 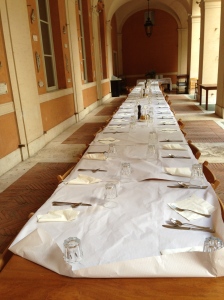