That, believe it or not, is an 1885 drawing  by John Root of what would become the Jackson Blvd. elevation of the Monadnock Building.  See the resemblance?  Me neither.  The Brooks Brothers of Boston commissioned the building as soon as plans for the southern extension of Dearborn were announced in 1885, but they then sat on the project until the run-up to the 1892 Columbian Exposition.  From the drawings executed then, it was a rush job, which partly explains the simpler elevations.  This version certainly looks a lot like the Rookery, which Root would have been working on at roughly the same time, as well as the lesser-known Phoenix and Insurance Exchange Buildings.  Root in the mid-1880s was a die-hard Richardsonian Romanesque designer, as were most big city architects of the day, and the transformation of the Monadnock from a heavy, brick pier building to a–uh–heavy, brick pier with bay windows building shows how much could change in five or six years.

Jason N. gets mad props for figuring it out…thanks for playing!  (and just for reference, here’s the Monadnock elevation from Chicago Skyscrapers.  It’s the Dearborn Street elevation, so the proportions are different, but you’ll get the drift…) 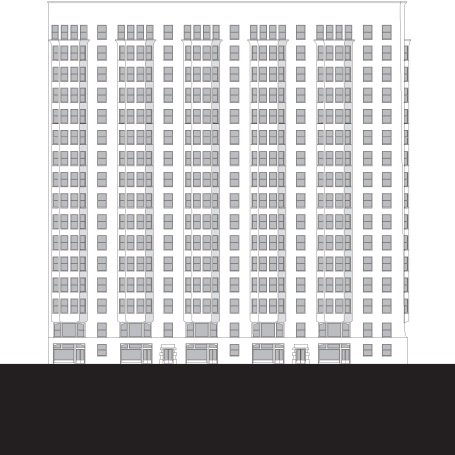