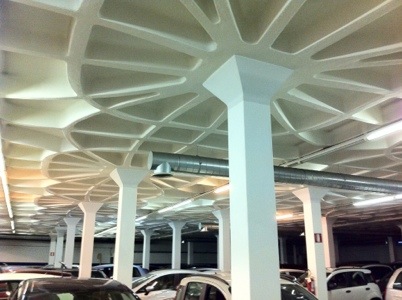 Thanks to the incomparable staff here at ISU’s Rome Program, today’s attempt went, um, a bit more smoothly than the last. Armed with a formal introductory letter, I walked into the appropriate Fiat dealership (June madness sale on Cinquecentos!) and explained my quest to the manager.

As fun as it’s been to talk with building owners and caretakers who know and appreciate what they’ve got, this was even more fun. Nervi is a fairly well-known heroic figure here, and when I told the manager that I wanted to see his garage, “I disegni di famoso ingegnere italiano, Nervi,” he looked at me like I’d lost my mind. His English was better than my Italian, not by much, but enough to let me know that it was just a garage, nothing special.

I showed him the classic image on my iPhone. “si, si…È stato progettato da Nervi,” I told him and his eyes got just a bit wide. He walked into the back office and got the keys,

And sure enough, there it was, the iconic isostatic slab that combines construction technique and expressive static form do fluently. I’ve been seeing this image, and been impressed by it, since my first architectural history class, and it was a powerful thing to stand underneath it. The trick here is that it’s really a simple two-way waffle slab. But a normal waffle slab is all 90 degree corners, because those are easy to build. And even though you can coax loads into turning 90 degrees, they kind of don’t want to–they really want to flow, river-like, into the nearest column. Nervi was able to construct this more elaborate shape by setting up molds for each unique pan shape and having workers bend wire mesh over them, after which they slathered a thin layer of cement over the mesh, entombing it and guaranteeing a monolithic element. These pans were laid out on simple wooden formwork, reinforcing bars were laid in the resulting trenches, and a full waffle slab was poured on top. The result was slightly more efficient in terms of static performance, and much more expressive. 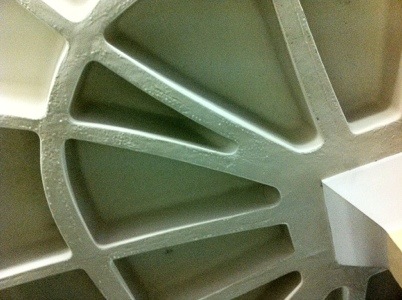 “E famoso?” he asked. “Molto,” I said, and I explained as best I could that the ceiling inspired later buildings like the Palazetto. He was impressed, and obviously happily surprised. An employee dropped off a car while I was taking pictures, and I could hear their conversation in the background. “Il famoso ingegnere, Nervi,” the manager said, pointing up at the ceiling.

We had a nice chat on the way back to the dealership, as best we could. I explained to him that this was all maybe for a book, that I was on “un itinerario di Nervi,” and that students in America–especially mine–learned a lot from the structures Nervi designed. He said he certainly knew Nervi’s work, especially the Stadio Flaminio, which seems to be the one everyone knows. He shook his head as we said arrivaderci. “Cosi,” he said. “Il garage es famoso.”

I was glad to see this particular site occupied and well-maintained. The handful of folks I’d asked about it hadn’t known where it was, or if it still existed. Despite Nervi’s renown, that sort of response usually means the building is forgotten, abandoned, or worse. I have a feeling that the next layer of Nervi sites will have slightly sadder results–water towers, warehouses, etc., that were important to his development as a designer but that wouldn’t be much noticed unless you knew what you were looking for. But Gatti has survived, and this lower level continues to prove useful as a storeroom. For Lancias and Fiats now, instead of for wool, but the widely spaced columns handle the turning radii of the cars as well as they must have handled fork lifts in the 1950s. A good outcome to a rather long search, and a really enjoyable morning. The best part is that the manager and I both have good stories to tell.