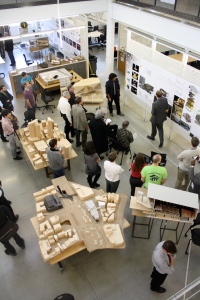 Mid-December means final reviews and the annual CSI Iowa Prize jury at Iowa State.  Our Comprehensive Design studio has had  it’s awards jury sponsored by the local chapter of the Construction Specifications Institute since 2004, and it recognizes the amazing work that our students put in every year.

Comprehensive Design is a requirement for NAAB accreditation–students have to demonstrate knowledge of building systems such as structures, cladding, services, and circulation through a design project.  We have always taken this a step beyond, asking that students also show they can fluently integrate these systems into coherent, legible buildings in a difficult urban site.  We’ve based versions of this project in Montreal, San Francisco and Seattle, but for the last few years we’ve found that Boston presents a huge challenge to midwesterners accustomed to nice, even city grids.

The program has also varied, from a digital media library to an olympic velodrome  This year we picked a performing arts center focused on jazz and experimental music.  We suggested that the Boston Symphony Orchestra, looking to expand its audience, was asking for a downtown facility that would focus on newer music while attracting a slightly hipper demographic.  Students did research on the music and on the city, and in September we took our annual field trip so they were able to see first hand the context (and, in the process, some rather amazing buildings). 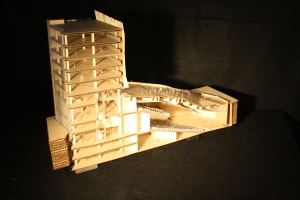 Each studio nominates two teams to compete for the CSI prize, and this year the two teams from Studio Leslie swept first and second place.  I couldn’t be prouder!  On the left is a section model by Xin Wu and Zijie Cao, who took the top prize.  Their scheme created an urban plaza on top of the main performance hall by pushing most of the building underground.  This led to some tough circulation issues, which they handled beautifully, and it gave them the opportunity to create a second public lobby at the top of the resulting green hill.  The program included a lettable office block, and these two used that as a backdrop to the new urban space.  Their theater was also beautiful–an asymmetrical, slightly jagged space whose acoustics they modeled relentlessly.  The result reflected the productive dissonance of the music they imagined would fill the hall.  A really gorgeous, very subtle project.

Alex Michl and Michael VanderPloeg took second place with a scheme that also combined a strong urban space with relentless but thoughtful execution.  Their auditorium became an urban sculpture, perched above an open plaza and fronting the lettable office space in a dramatic, very modeled composition.  The lobby was pulled back into the center of the site, drawing concert-goers in to the middle of the complex and then sending them back out toward the main street in a gently rising set of ramps and stairs.  Perching 1200 people above an open space presents a set of really tough circulation and fire exiting problems, but they handled these deftly and, again, combined acoustic design with a deft translation of music into interior space.

I felt like we had four or five projects that would have been competitive in the final jury this year–a genuinely extraordinary studio.  These two teams represented the hard work of their colleagues well, though, and with a couple of stellar presentations they made all of us proud.  I’ve endured a fair amount of (good-natured?) ribbing from my colleagues for coaching two winners, but all twelve of the nominated teams were competitive and compelling.  CSI does good work, and we’re profoundly grateful that they continue to sponsor this prize program.  Our students are universally hard-working, diligent, and yet modest, so when we get to celebrate their efforts we’re always thankful.