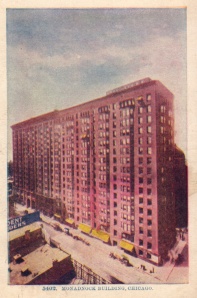 I spent a month this summer at the Canadian Centre for Architecture studying their collection of over 400 Burnham and Root drawings for the Monadnock–one of Chicago’s best known 19th century skyscrapers and the building traditionally seen as the tallest and most complete statement of the masonry-structured skyscraper there or anywhere else.

What I found doesn’t so much contradict that traditional view as expand upon it, and while I want to save some secrets for the book (manuscript complete and in review as we speak), there are some aspects of the research that I think deserve some immediate discussion.  So I’m going to post a couple of bits this week on the building and its structure.

First things first: in addition to an immense debt of gratitude to all of the staff at CCA, I also owe big shout-outs to Bill Donnell, the building’s owner, who has now twice volunteered his time to show me around the building–including its basement(where you can see perhaps the only exposed grillage foundation on the planet) and some of its more intricate structural elements; and to Michael Blossom, a high school classmate and owner of the two Floradora boutiques on the ground floor, who let me poke around while he was having some renovations done.

So today, some basics.  The building was commissioned by Boston’s Brooks Brothers, who had previously hired Burnham and Root to design the hugely successful Monadnock Block.  In 1885, anticipating the opening of Dearborn Street to the south, the Brooks’ asked B+R to design a large block on the sliver of land left between Dearborn and what’s now Federal Place.  Root’s response was an expansion of the Montauk’s basic idea, but with brick structure organized into piers and window surrounds, adding a grain to what had been very neutral elevations in the earlier project.  With uncertain economics, however, the project was put on hold for several years.

In the runup to the 1892 Columbian Exposition, however, the Brooks’ realized the chance to develop what was becoming a prime piece of land, and they seem to have asked Burnham and Root to rush the project to completion in 1890-91.  Whereas the earlier scheme was rendered in immaculate drawings, the latter plans were clearly done in a rush.  Several competing myths suggest that Root either trimmed the ornament from this scheme because of the Brooks’ concern that it would cost too much, or that the minimal elevations were actually planned by Burnham while Root was on holiday, but more impressive was the fact that Root responded to contemporary developments in cantilevered steel construction and large, light-gathering bay windows.  These elements were grafted on to a stripped-down version of the original scheme, pushing the building’s rental spaces out from between massive weight-bearing piers of masonry.

Root’s detailing, of course, belied the casual mythology of the building’s aesthetics.  Several hundred custom sizes of brick were required to construct the building’s flowing, undulating brick elevations and the famed corner chamfers, a difficult fabrication and construction issue that shows Root’s concern that the building read monolithically, and as a definitive statement in brick.

The Monadnock was not just a brick structure, however, and its bay windows suggest that, rather than being seen as the final statement of masonry skyscraper construction, it might better be seen as a pivotal moment in the relationship between steel and brick.  I’ll post some diagrams and explain why I think this is the case sometime mid-week.