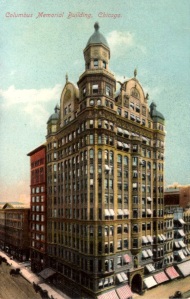 Shoppers at the Old Navy on State Street probably don’t realize that they are buying distressed polo shirts on the site of one of the most widely panned skyscrapers in the city’s history.

W. W. Boyington was, at the time, one of the grand old men of Chicago architecture.  Designer of the Water Tower, among other structures, his reputation extended back before the Great Fire.  But as younger architects arrived on the scene, Boyington’s aesthetics never really changed, and his later buildings seemed over-ornamented and fussy compared with buildings such as the Auditorium.  He was, however, a conservative voice in the city, and developers that had little faith in the new forms of construction found him a reliable pair of hands.

The Columbus Memorial was intended to capitalize on the 1893 Columbian Exposition.  Its primary tenants were to be doctors, though the lower floors were intended for retail, particularly the jewellery trade.  Boyington responded with an enthusiastic ornamental program:

“On each side of the entrance, which will be in the center of the State street front, will be glass mosaics of the Landing of Columbus and the Presentation at the Court of Isabella.  A ten-foot bronze statue of Columbus will be placed above the entrance.  The medallions and Spanish coats-of-arms are to be introduced into a cornice encircling the building.  A tower 240 feet in height, surmounted by a glass globe, will be a feature of the structure.  This globe is to be of opalescent glass, lighted by a 3,000 candle-power electric light.  The continents are to be marked in color on the globe, with a cut jewel locating Chicago.  The materials to be used in the exterior structure are stone and terra-cotta on a steel framework.”

Not surprisingly, the Columbus was seen as somewhat excessive, and subsequent criticism of it placed it in firm opposition to the simpler expressions of structure and skin that were just beginning to emerge in the city around that time.  G. Twose, writing in The Brickbuilder in January, 1894, suggested that it represented the opposite to an approach that would be most widely championed by Louis Sullivan:

“The designer had in this case and opportunity which he neglected—a fault to be found in nearly all the buildings.  Here was a steel building, complete in itself, except for certain elemental protection which its nature demanded, such protection being admirably rendered by terra-cotta, a material ductile to the greatest degree.  What, then, would be the natural artistic reasoning in manipulating such covering?  Why, surely this; here is a building having been built of a certain material, which is sufficient as far as strength is concerned, admirable in the economy of space and labor which its use permits, possessing endless possibilities, but brought into a regular and ordered system by means of certain laws and principles which rigidly govern its use.  This material has, however, to be supplemented in one regard by some other material, and one is quickly found whose chemical composition renders it perfect for such purpose, while at the same time it possesses unbounded capabilities of recording artistic thought; it owes obedience to no system of laws which would be antagonistic to its use in the proposed position; it is weak where the strength of the steel renders such weakness unimportant, and possesses to a very high degree those qualities wherein steel is deficient.  Having thus the building of steel on the one hand, and this subsidiary material on the other, it would be by far the most natural, the most logical, and the most artistic proceeding to apply this protective coat to the steel skeleton in such a manner that the steel construction should determine all forms, and dominate the ultimate expression, that the terra-cotta should faithfully follow each line, advance where the steel advances, and retreat where such is the action of construction, indicating joint or connection, flange, cap and bracket—a true and faithful indication of the substructure, modeled into beauty by the hand which applies it.”

Twose’s article was widely read, and it represents the first salvo fired in the critical discussion of what might be called the ‘negative merits’ of the tightly clad steel frame–with less opportunity offered by more functionally delimited frames and windows, the next generation of Chicago skyscrapers couldn’t help but avoid the ornamental excess of the Columbus.

This was Boyington’s last major work in Chicago.  He died in 1898 at the age of 80.  Not only was he one of the City’s oldest and most respected architects, he also served as the Mayor of Highland Park.  Twice.