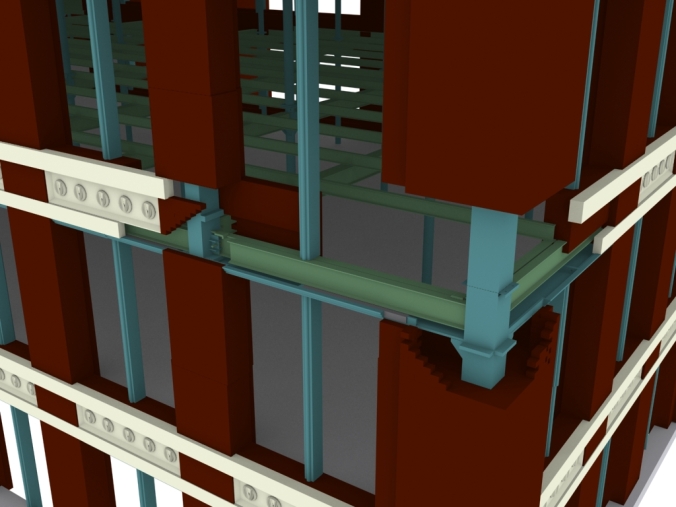 Happy Birthday to William Le Baron Jenney, whose career included a stint as an engineer on Sherman’s March.  When he returned to Chicago after the Civil War, he quickly gained a reputation as an innovative structural designer and a questionable stylist.

The Home Insurance Company hired Jenney in 1883 after a competition to design new headquarters and speculative office space downtown.  The Company had earned a reputation in the west after its prompt settlement of claims arising from the 1871 and 1874 Chicago fires, and it sought to capitalize on this with a new, prominent outpost.  In discussions with Jenney, they specifically asked that he give thought to maximizing daylight in the offices, and Jenney responded by developing a hybrid structural system in brick and iron.

His earlier buildings, in particular the Leiter Store of 1879, had used iron columns to reinforce masonry piers. This allowed the piers to be smaller, and thus allowed windows to be larger.  He adopted a similar strategy in the Home Insurance, but with one additional detail–cast iron lintels connected directly to the columns and spanning the windows–that carried a small but significant portion of the exterior walls’ weight.  To later generations, this detail suggested the beginnings of the “curtain wall,” that is, an exterior wall that was carried by an interior metal structure, rather than one that carried the weight of the interior floors.

Just how important this distinction was has been debated ever since.  Jenney, writing about the Home Insurance for the Sanitary Engineer in 1888, barely mentioned the building’s superstructure, concentrating instead on its spread foundations, which were also relatively new for the time.  It was not until the 1890s that the debate began in earnest over who could claim the title of “inventor of the skyscraper,” and that the Home Insurance was seen as such a key innovation.  On its demolition in 1932, two committee’s examined the frame as it was being dismantled and disagreed on the building’s status as a ‘first.’  One group claimed that the iron frame had carried nearly all the weight of the masonry, but an independent group of engineers noted that the iron and brick must have worked in concert, and that the provision of heavy masonry shear walls on the building’s rear elevations negated many advantages of the more skeletal fronts.

I’ll save my own opinion for the book (now tentatively titled A Great Architectural Problem: The Technical Evolution of the Chicago Skyscraper and out, I hope, sometime in 2012) but the above diagram by Ryan Risse, a recently graduated Iowa State student, gives a fairly clear idea of how the frame and brick may have worked together.  This model and others will allow readers to see more clearly the importance of details like this, and to appreciate how building skins and structures were gradually separated for reasons both functional and material.